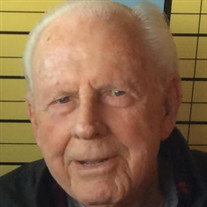 William B. (Bill) Campbell, 97, a longtime resident of Orange Beach and Fairhope, died Thursday, April 1, 2021 in Richmond Hill, Georgia. Bill was born in Natchez, Ms. After graduating high school, he worked as a machinist in the Mobile shipyards. In 1943, he joined the Army Air Force, where he completed training to become a B-24 pilot. During a brief stay in a military hospital in New Orleans, he received particularly attentive care from a registered nurse by the name of Vergie "Sandy" Sanderson. They began their 71 year marriage in 1946. Upon completion of his military service, he received his Bachelor's degree in Mechanical Engineering from Mississippi State and his Master's degree from Georgia Tech in 1951. The family moved to Cincinnati, Ohio where Bill worked at General Electric's Aircraft Engine division, helping to push the limits of jet engine design to power military fighter planes as well as the C-5 Military Transport. After his early retirement from GE due to medical issues, the family moved to their longtime vacation home in Orange Beach in 1974, operating rental cottages on the grounds of the old Orange Beach Hotel, currently the site of the Coastal Arts Center and Waterfront Park. In 2000, Bill and Sandy, moved to Fairhope where they resided for 15 years before moving to Richmond Hill, Georgia. Survivors include sons, David Campbell of Springboro, Oh., Donald Campbell of Marietta, Ga., Greg Campbell of Magnolia Springs, Al., and Mark Campbell of Richmond Hill, Ga., Erick Myers of Brussels Belgium, twelve grandchildren, and numerous great grandchildren. He was preceded in death by his wife, Sandy, and oldest son, Bill Campbell Junior. Services will be Saturday, April 17 with visitation at 9 am, Chapel Service at 10 am, followed by a graveside service. Arrangements are being handled by Pine Rest Funeral Home in Foley, Al.

William B. (Bill) Campbell, 97, a longtime resident of Orange Beach and Fairhope, died Thursday, April 1, 2021 in Richmond Hill, Georgia. Bill was born in Natchez, Ms. After graduating high school, he worked as a machinist in the Mobile shipyards.... View Obituary & Service Information

The family of Mr William Campbell created this Life Tributes page to make it easy to share your memories.

William B. (Bill) Campbell, 97, a longtime resident of Orange...

Send flowers to the Campbell family.