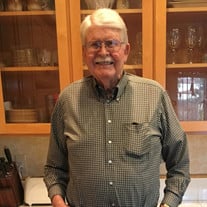 Wayne Alfred Miller, age 91, of Gulf Shores, AL, passed away on Thursday, January 28, 2021. Thankfully, Wayne knew how to dance. In 1955, he joined friend Don Anderson for a drink at Carl’s Bar in San Diego. Don was on a date with Nora Walker. When the music started playing, Don asked Wayne to dance with Nora because he didn’t know how to. Nora and Wayne danced into each other’s hearts. For several weeks, Wayne failed to call her back. At the time, he was preoccupied with studies at San Diego State College. But Nora found a clever way to move the relationship forward. She was having an appendectomy at Hillside Hospital and asked Wayne to visit. The rest is sixty-four years of family history. In 1956, Wayne and Nora drove to the bright lights of Las Vegas, gambled on their future, and were married. Barbara Miller was born one year later; joining eight-year-old Bob Walker, Nora’s son from her prior first marriage. It was a life-changing time in their lives. The year before, Wayne had started employment at Rohr Corporation; advancing with the aerospace company for almost thirty years. Family highlights include numerous yearly vacations. Barbara and Bob followed with marital partners and families of their own. Barbara had the good fortune to discover Dennis Culleton while both also worked at Rohr. They nurtured two exceptional children, Christine and Andrew. Bob married his best friend Frances Mooney. Together, the couple provided a purr-fect home for countless cats and two dogs. After several years of challenging health, Nora passed in 2002. In 2019, Wayne moved to Gulf Shores to share Alabama living with the Culleton and Blass families. Granddaughter Christine married Ben Blass (2012) in Birmingham; providing Grandpa Miller with two lovable great-grandchildren, Maddie and William. Grandson Andrew graduates in May from Cal State Fullerton with a degree in Geology. Wayne was an avid golfer and sports enthusiast. His move from San Diego’s yearly “heartbreak season endings” to Crimson Tide - SEC Victory Country finally provided him with memorable, cheerful celebrations. He was preceded in death by his parents, Alfred Miller and Edna Elizabeth Schroeder; brother, Robert Bernhard; and sister, Edith Roselyn. Wayne’s survivors include stepson, Robert Walker; daughter, Barbara Culleton; daughter-in-law, Frances Mooney; son-in-law, Dennis Culleton; grandchildren, Christine Blass and Andrew Culleton; great-grandchildren, Maddie and William Blass; nephew, Richard Stoll; niece, Sandra MacPherson; nephew, Bruce Stoll; and many beloved relatives and friends. Memorial Services will be held in May at Greenwood Memorial Park in San Diego. In lieu of flowers, donations can be made to the COPD Foundation in the name of Wayne Alfred Miller.

Wayne Alfred Miller, age 91, of Gulf Shores, AL, passed away on Thursday, January 28, 2021. Thankfully, Wayne knew how to dance. In 1955, he joined friend Don Anderson for a drink at Carl&#8217;s Bar in San Diego. Don was on a date with Nora... View Obituary & Service Information

The family of Mr. Wayne Alfred Miller created this Life Tributes page to make it easy to share your memories.

Send flowers to the Miller family.