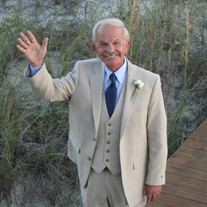 Timothy “Tim” Jackson age 70, born March 31, 1949 in Birmingham, Alabama, was the oldest child of the late Floyd Dean and Claudia Jackson and the big brother to Benita Babbage, Debra Hicks (Gregory) and Cara Bowling (James). He married Jennifer, his loving and devoted wife of 43 years in 1976. He was a wonderful father to his four children, Scott Jackson, Kelli Jackson, Matthew Jackson (Jessica), and Stephanie Catron (Jonathan). His greatest joys in life were his grandchildren Austin, Lola, Claudia, Alden, Emmet, and Amilia which he adored, and spoiled beyond measure. In addition to being a great family man, Tim was an avid sportsman, lover of the outdoors, and a huge Alabama football fan. His weekends were full of adventurous family road trips to the lake, mountains, and beach where he could share his love with those around him. Tim was a member of the Tarrant High School graduating class of 1968. After graduation he started his professional career as a switchman on the railroad with Jim Walters Corporation. In 1980 he and Jennifer pursued their dream of opening their own business, T & J Electric Inc. in Birmingham, AL. His “no guts, no glory” mentality lead the company to become one of the leading commercial electrical companies in the area. In 2004, after Hurricane Ivan, Tim relocated his family and business to Orange Beach, AL to help rebuild the Gulf Coast. A decision he said was the best thing he ever did for himself and his family. This move allowed him the opportunity to serve the Lord through involvement in numerous ministries over the years. He belonged to the 4 Corners Group, which helps men and women struggling with addiction attend the Home of Grace. After their completion of the program Tim continued to sponsor many of these individuals in their road to recovery. He also volunteered at the Christian Service Center by serving on the Board of Advisory, and delivering baked goods every Tuesday for 8 years to support local bread ministries. He loved Orange Beach and enjoyed dedicating his time and resources to his community, neighbors, and friends. His leadership on his neighborhood Home Owners Association led to the revamp of the community pool, as well as new lighting and beautification projects. He was a staple at the annual Orange Beach Volunteer Fire Department’s BBQ fundraiser. He became an honorary member of the Sirens of the Sea, and a member of the Mystical Order of the Treasures of the Isle Mardi Gras Krewe. He served as Vice-President, President, and Parliamentarian of TOI and in 2017 was elected King of the Krewe, an honor that brought him much joy and pride. Tim was a servant to God since he accepted the Lord Jesus as his Savior at age 14 and strived to be faithful until his last breath. His homecoming was December 1, 2019. His family will cherish the memories until together again. Visitation will be at 1:00pm and Celebration of Life at 3:00pm on Saturday, December 7, 2019 at The Island Church at 25550 Canal Road, Orange Beach, AL with Pastor Fred Franks officiating. In lieu of flowers, we ask that donations be made in Tim’s honor to the Christian Service Center in Gulf Shores, AL. Honorary Pallbearers are Justin Ashley, Nat Pruitt, John Hicks, Philip Baker, Jack Showacre, Brian Bodine and Stan Moss.

The family of Mr Timothy "Tim" Jackson created this Life Tributes page to make it easy to share your memories.

Send flowers to the Jackson family.