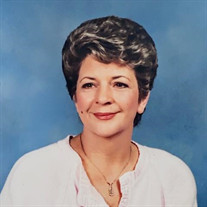 Shirley Harris, 79, of Gulf Shores, AL went to dance with her Lord upon the heavenly streets of gold on Monday, May 3, 2021. Shirley was born on April 23, 1942 to Charles and Norma Jean Milton. On August 12, 1961 Shirley married the love of her life, George Harris, Sr. The couple spent 40 loving years together, but it wasn’t nearly long enough. They embodied a marriage of grace, partnership, dedication, commitment, passion, and the truest love of family. While Shirley had many accomplishments in her 79 years, some of her favorite times were spent welcoming all to her table just as her Lord commanded her to do. Shirley was always the most gracious and welcoming host whether it was for dinner at her own home or one of the many restaurants she and George owned and operated like El Toro’s in Birmingham and Nolan’s Restaurant in Gulf Shores. She and her family became a staple in the Gulf Shores community and took pride in leaving a successful legacy in the hospitality industry in such a hospitality-driven town, but her most important legacy up until her very last breath was her family. Shirley was the brave mother to five very passionate boys. She loved them hard and made sure they never doubted that. She devoted her life to ensuring that they would grow up to be men of faith, honor, and integrity. They are her greatest success, and she was so proud of each one of them. Each of her sons followed in their father’s footsteps having married remarkable women and Shirley loved all five of her “daughters-in-love” as if they were her own. She spoke often of how blessed and thankful she was for their love, compassion, and patience. The Matriarch of the Harris Family is finally resting peacefully with her partner and truest love knowing that the legacy they leave behind will live on through the family they built together. Shirley is preceded in death by her beloved husband George Harris, Sr. and her parents Charles and Norma Jean Milton. Shirley is survived by her brother Bob Milton (Freida) and sister Debbie English; five sons (all who were her favorite), George (Kristi), Philip (Jill), Hudson (Denise), Emery (Cathy), and Spencer (Linda); thirteen grandchildren, Lindsay McClure (Hunter), Whitney Harris, Liana Phelps (Blake), Haikel Harris, Hunter Harris (Morgan), Marcy Williford (Brandon), Emery Harris, Tyler Harris (Claire), Reagan Harris, Jake Harris, Luke Harris, Liberty Harris, and Lincoln Harris; seven great grandchildren, Avery Lee McClure, Rylan Norris, Hayden Grace McClure, Cole McClure, Kinley Phelps, Fletcher Phelps, and Brooks Harris. https://stmargaretofscotlandfoley.us7.list-manage.com/track/click?u=d51bfc8a9fea5b5d72312f647&id=1c84a797da&e=43aacfe3d3 https://stmargaretofscotlandfoley.us7.list-manage.com/track/click?u=d51bfc8a9fea5b5d72312f647&id=5746f0ea95&e=43aacfe3d3

Shirley Harris, 79, of Gulf Shores, AL went to dance with her Lord upon the heavenly streets of gold on Monday, May 3, 2021. Shirley was born on April 23, 1942 to Charles and Norma Jean Milton. On August 12, 1961 Shirley married the love of... View Obituary & Service Information

The family of Mrs. Shirley Harris created this Life Tributes page to make it easy to share your memories.

Shirley Harris, 79, of Gulf Shores, AL went to dance with her...

Send flowers to the Harris family.