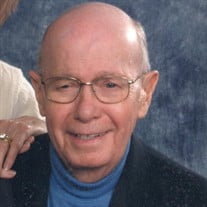 Sam Adams, age 85, a retired U.S. Navy Captain and long-time resident of Foley, AL, passed away 11 January 2021. An incredibly smart and kind man, he leaves behind his loving wife Mary (Raftery), daughter Erin Adams, sister Angela (Priester) Watson Bess and many other truly valued family and friends all over the world. Sam was born in Thomaston, GA and graduated from Lanier High School in 1953. After graduating from Auburn University he entered the Navy in 1957. He continued to serve his country for 30 years until retirement. His love for his country showed him the world. Sam completed numerous sea duty tours on both surface ships and various submarines. His love for small spaces under the water, as a 6’2 Naval Officer, was total. As Sam often said “There are only two types of ships: submarines and targets.” When stationed back in Washington, D.C. he held many executive positions at Naval Headquarters. During this time he met his wife, Mary, also a U.S. Naval officer, and they had Baby Erin. After a 5-year tour in San Diego, CA he retired from the Navy. He and his family eventually returned to Alabama in 1988, built a beautiful California style house, on a 3 acre plot of land in Foley so he could enjoy retirement. After the Navy, his hobbies included stained glass, professional tax preparation, house and yard work, a love for good food and wine and travels with his family. Visitation held at St. Margaret of Scotland Catholic Church, 19 January at 10 am, followed by Mass at 11am. Graveside services will be held at a future date in Arlington National Cemetery. In lieu of flowers, family requests donations please be made to St. Benedict School, 12786 Illinois St., Elberta, AL 36530 (https://saintbenedict.net.)

The family of Captain Samuel Wren Adams created this Life Tributes page to make it easy to share your memories.

Send flowers to the Adams family.