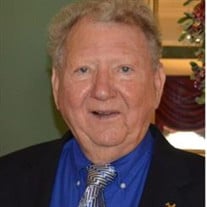 The Honorable Ronald "Ronnie" F. Callaway of Foley, AL, first Mayor of Orange Beach, passed away peacefully at his home in Foley, AL, March 9, 2020, attended by his daughter, grand-daughter, son-in-law, and Foley Hospice. Ronnie is the son of Rafael and Forrest Callaway of Orange Beach, AL. Ronnie grew up in Mobile and Baldwin Counties and became familiar with the local waterways. He attended high school at UMS and Murphy and later received a General Educational Development diploma. He enlisted in the Alabama National Guard as an artilleryman 1948-1954, and was called to active duty with the U.S. Army 1950-1952. Following military service, Ronnie graduated from the University of Alabama in 1957 with a BS in Physics. He held positions with Lockheed, NASA, and the U.S. Army Corps of Engineers. In 1978 he obtained a bachelor's degree in Civil Engineering and Surveying from the University of South Alabama and started his own firm. In 1984 he ran for election as the first mayor of the newly incorporated city of Orange Beach, being responsible for organizing and managing all municipal services for the town. He served two terms until his wife, Margaret, died in 1991. Thereafter, he earned a realtor license and was active for many years. Ronnie maintained his physical fitness through exercise and had a keen interest in National and Alabama politics to the end. Ronnie had a love of flying, and obtained and maintained a private pilot's license until he passed. He worked hard to become proficient, spent many hours in the simulator, and earned an FAA instructor license. He flew in military aircraft with his son, Ronald, and took members of his family on private flights in the Southeast. His other interest was charitable contributions, especially for the work of his church, Fisherman Baptist of Bon Secour. Ronnie is survived by a son, Ronald (Pam) of Charlotte, NC, and a daughter, Lynn (Ralph Buck) of Foley. He was preceded in death by a son, Jesse, of Ohio, and wives, Margaret Wooley, Mary, and Anne. Other family members include step-son, Danny Mcduffie (Melanie) of Foley; step-daughter Lisa Mcduffie Wells of Spanish Fort, AL; cousin Ella H. of Foley; nephew Tim (Barbara), of Cumming, GA; Grandchildren Jay (Melody) of Charlotte, NC, Katie Thompson (Chris) of Pittsburgh, Pa, Scott Denton (Barbara) of Hilden, Germany, James McDowell (Angel) of Saraland, AL, Matthew McDowell (Kayse) of Wilmer, AL, Jessica Cater (Nicholas) of Columbus, OH, Melissa Stacy (Timothy) of Chillicothe, OH; and many great-grand children. Ronnie tried to stay in close contact with all his family and enjoyed gatherings at his home with several generations. Donations in lieu of flowers are requested for Fisherman Baptist Church or a veteran's organization of your choice

The Honorable Ronald "Ronnie" F. Callaway of Foley, AL, first Mayor of Orange Beach, passed away peacefully at his home in Foley, AL, March 9, 2020, attended by his daughter, grand-daughter, son-in-law, and Foley Hospice. Ronnie is the son of... View Obituary & Service Information

The family of Mr. Ronald "Ronnie" F Callaway created this Life Tributes page to make it easy to share your memories.

Send flowers to the Callaway family.