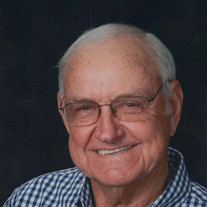 Ronald Jones, resident of Fairhope, AL, stepped into glory Wednesday morning, June 5th, 2019 with his devoted wife by his side. Ronald graduated from Greensboro High School and Livingston State. He proudly served in the U.S. Army. He had a successful career in the paper industry having worked in Demopolis, AL, Selma, AL, Wickcliffe, KY, Sao Palo, Brazil and Stevenson, AL. He retired from Mead Containerboard, Atlanta, GA as Resident Manager and V.P of Manufacturing of the Stevenson mill. He was committed to self directed work teams and empowering his employees. Ronald had a passion for serving others through disaster relief organizations. He never met a stranger, had an infectious smile & laugh and would help wherever he was needed. He was an avid fisherman, marksman and archery deer hunter. Spending time on the beach with his family was his favorite vacation. He also enjoyed making biscuits for his granddaughters. Ronald was saved by the grace of God in his mid 40's and spent the past 35 yrs living and sharing his faith. He was a member of 3 Circle Church and Farmer Small Group and was a former member of Heartland Church in Paducah, KY. He was a 5yr 1mth pancreatic cancer survivor. Throughout his diagnosis and treatment, he never let cancer define him. He knew God had a plan. He is preceded in death by his parents, Connie Jones, Sr & Hazel Kilpatrick Jones, brother, Connie Jones, Jr, & sister, Sue Henry. Survivors include his wife and best friend of 32 yrs, Betty H. Jones. Sons, Keith (Alison) Jones of Spanish Fort, AL., Ken (Janice) Jones of Columbus, GA and Kurt ( Lauren) Jones of Northport, AL. Grandchildren, Gracelyn Jones of Athens, GA, Allison (Andrew) Forbes of Denver, CO and Oscar Jones of Columbus, GA. Brother in law, Richard ( Susie) Harris of Owensboro, KY, dear aunt, Birdis Jones of Birmingham, AL. One sister, several nieces, nephews, cousins and a host of friends. A Celebration of Life will be held Saturday, June 8th @ 3 Circle Church, Fairhope, AL. Visitation will begin at 1:00 with services at 2:00. Internment will be in the Veteran's Cemetery, Spanish Fort, AL at a later date. In lieu of flowers, memorials can be sent to 3 Circle Church (Forward Project), 10274 AL 104, Fairhope, AL 36532. Pine Rest Funeral Home, Foley, AL is in charge of arrangements. Special thanks to Dr. Reece Jones & staff @ Southern Cancer Center, Dr. Jason Lorch, Dr. Rick McCombs and Springhill Hospice.

Ronald Jones, resident of Fairhope, AL, stepped into glory Wednesday morning, June 5th, 2019 with his devoted wife by his side. Ronald graduated from Greensboro High School and Livingston State. He proudly served in the U.S. Army. He had a successful... View Obituary & Service Information

The family of Mr Ronald Jones created this Life Tributes page to make it easy to share your memories.

Send flowers to the Jones family.