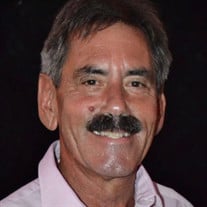 Robert “Bob” L. Wesner, 67, of Foley, AL, passed away peacefully on October 9, 2021. He was the husband of Tina (Gustin) Wesner, with whom he shared almost 14 years of marriage. Robert was born May 2, 1954, near Chicago, IL, to Kathryn (Gibson) and Ralph A. Wesner, and raised in Greenfield, IN. In his youth, Bob loved walking to the local fishing hole, spending time with family and friends, and going to the Indianapolis 500. He attended Greenfield Central High School. Shortly after high school, Bob made his way to Florida to live with friends. It was there that he fell in love with southern living and would find it difficult to think of enduring Indiana winters again. He returned to Indiana briefly in his early twenties when he married his high school sweetheart, Pamela Finley. During their short marriage, they had one daughter, Bobbi Joleen, in 1978. He later returned to the south and moved near the Gulf Coast in Alabama, where he would remain for the rest of his days. Bob began work as a carpenter in his early adult years. He always had a strong work ethic and was always dependable. He helped build and repair a tremendous number of homes and buildings over the years and was always happy to help anyone in need. He continued working for over 45 years, and only recently retired due to declining health. In 1999, he was called “Grandpa” for the first time. He would eventually go on to have four grandsons, Kadin, Miles, Graham, and Lawson. He really enjoyed teaching them to fish, catch lizards, and enjoyed “piddling around” with them outside when they spent time together. In 2007, he married his best friend of many years, Tina Gustin. He became a stepdad to Stephanie and quickly learned the ropes as a softball parent. Some extra special memories include going to many softball games, attending BayFest, and taking the girls out on the fishing boat. Bob never met a stranger and was always up for a chat over a cold beer. He loved to fish, grill, spend time outside, and always looked forward to entertaining family and friends when they visited. He enjoyed nature and animals and was especially fond of his and Tina’s dog, Oscar. He had a great sense of humor, a contagious laugh, and never failed to be the most easy-going guy in the room. Left to cherish Robert’s memory are his wife, Tina Wesner of Foley, AL; his daughter, Bobbi (Jeff) Gielerak of New Palestine, IN; his stepdaughter, Stephanie (Tyler) Harrison of Fairhope, AL; grandsons, Kadin (Emma) Hamby, Miles Gielerak, Graham Gielerak, and Lawson Harrison; brother, Alan (Glenna) Wesner, along with other loving relatives and friends. He was preceded in death by his parents and sisters, Debbi Colwell and Kathy Medlin.

The family of Mr Robert Lawrence Wesner created this Life Tributes page to make it easy to share your memories.

Send flowers to the Wesner family.