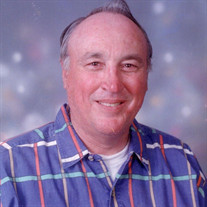 Robert Jacob Ruegg, also known to those who loved him as Bobby, passed away peacefully and gained his wings on Thursday evening, Sept 9, 2020 at the age of 82. A lifelong resident of Foley, AL he was born to Jacob and Rose Ruegg on January 29, 1938 at the local Holmes Hospital. He graduated from Foley High School class of 1956. Soon after enrolling at Pensacola Junior College, Bobby was called into service by the Army National Guard during the Vietnam war. When he returned home to Foley, he joined his father on the family farm and continued the legacy of row crop farming and tending to their Pecan trees and at one time dairy cows. During the years they farmed over 500+ acres of soybeans, oat, wheat, snap beans and corn. This property is now the location of several city parks and holds the annual Balloon Festival. Though he always called Foley home, he expanded his farm lands north into Monroe County in his later years to continue his passion on almost another 500 acres. He finally retired in 2016 after a full life of farming. He also owned property in Honduras and Costa Rica at one time and loved spending time there. He was an active member of his church, he enjoyed helping others when he was able. His interests through the years have included real estate investing, traveling, reading, boating, swimming and driving his cars way too fast! His favorite car of all was his 1959 Chevy Impala his Dad had given to him. He loved seafood and his favorite color was red. A beloved son, father, and grandfather. Bobby is preceded in death by his loving parents Jacob and Rose Ruegg of Foley, AL and survived by his son, Dino Ruegg his wife Pam of Riverview FL., daughter, Jenelle Mapes of Houston, TX., daughter, Carol Beebout and her husband Kevin of Foley, AL., three grandsons, Robert and Lawton Mapes of Houston TX., Kevin Jacob Beebout and his wife Kayla of Daphne, AL., granddaughter, Jessica Naccari and her husband John David of Birmingham, AL., and four great grandchildren. Funeral services will be held from the Chapel of Pine Rest Funeral Home on Monday September 28, 2020 at 3PM. The family will receive friends at the funeral home on Monday from 1 until 3PM. Interment will be in Pine Rest Memorial Park.

Robert Jacob Ruegg, also known to those who loved him as Bobby, passed away peacefully and gained his wings on Thursday evening, Sept 9, 2020 at the age of 82. A lifelong resident of Foley, AL he was born to Jacob and Rose Ruegg on January 29,... View Obituary & Service Information

The family of Mr. Robert Jacob Ruegg created this Life Tributes page to make it easy to share your memories.

Robert Jacob Ruegg, also known to those who loved him as Bobby,...

Send flowers to the Ruegg family.