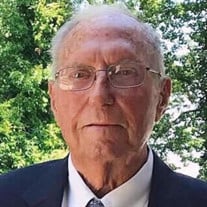 Robert Earl (Bobby) Barnes, 82, of Daphne, AL, passed away peacefully on January 1, 2021, at Mobile Infirmary. Bobby was freed from Parkinson’s disease when he went to be with Our Heavenly Father. Bobby was born on June 13, 1938, to Richard Leon Barnes and Alyne Murphy Barnes. Bobby was married to Barbara Peacock on August 6, 1961, in Atmore, Alabama. They raised two sons: Jeff and David. Bobby graduated from the University of Alabama with a degree in Industrial Management, and he worked for Vanity Fair Corporation for 30 years before retiring in 1993. Bobby was a very giving person, selflessly serving the needs of others before himself. He took great pride in creating the “prettiest” vegetable garden for many years – always with enough bounty to share with others to enjoy his hard work. He likely holds the record for the most bream ever caught in Highland Lake, and, as a result, perfected the art of orchestrating the perfect fish fries for all to enjoy. He and Barbara definitely shared the gift of hospitality, and loved the precious times with family, friends, and neighbors. Bobby is survived by his wife of 59 years, Barbara, his two sons; Jeff (Reta) Barnes and David (Courtney) Barnes; his four grand-daughters; Lucy, Frances, Lillian, and Harper, one sister; Kathleen Reaves, and numerous nieces and nephews. He is preceded in death by his parents; Richard and Alyne Barnes, three brothers; Richard, Jr., Harold and Wendall, and three sisters; Ila Merle Franklin, Peggy Grice, and Joan Nix. A Celebration of Life Service will be held on Saturday, January 9, 2021, at 1:00 p.m. at the Christian Life Center of Springville First United Methodist Church, in Springville, AL. In lieu of flowers, donations can be made to Springville First United Methodist Church (6471 US Highway 11, Springville, AL 35146) or Fairhope United Methodist Church (155 S. Section Street, Fairhope, AL 36532).

Robert Earl (Bobby) Barnes, 82, of Daphne, AL, passed away peacefully on January 1, 2021, at Mobile Infirmary. Bobby was freed from Parkinson&#8217;s disease when he went to be with Our Heavenly Father. Bobby was born on June 13, 1938, to Richard... View Obituary & Service Information

The family of Mr Robert "Bobby" Earl Barnes created this Life Tributes page to make it easy to share your memories.

Send flowers to the Barnes family.