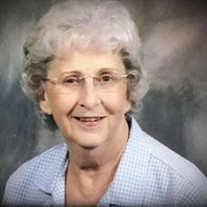 Nancy Rita Carroll Morgan, 84, passed from this life on Tuesday, July 6, 2021 in Pensacola after a brief illness. She was a native of Whistler, Alabama and a long time resident of Brewton and Bear Point (now Orange Beach). In her childhood, Rita was quite the tomboy. She loved playing basketball, softball, and at the school playground behind the family house. She spent time playing piano at her church, singing in chorus at high school, and hired as a teenager to work in bookkeeping at Grants Department Store in downtown Mobile (with lunch time spent feeding peanuts to squirrels at Bienville Square). Rita graduated from Vigor High School in 1953. She met Cecil Morgan, love at first sight, and they married soon thereafter. Family was important to her since she and Cecil had both lost a parent in early childhood. They immediately started a family, with Rita having four baby girls within five years. Supporting that family was important, and that support caused more that a few moves, including relocating to jobs in St. Marys, Georgia, and most importantly to Brewton, where the family lived for the next thirty six years. Life was busy for Rita. She sewed her daughters’ clothes and dressed them alike. Saturday night was “hair curling night” at the Morgan house, complete with bobby pins and sponge curlers. When it was time to go to the grocery store, Momma would shop at the Piggly Wiggly with two baskets and four girls. People loved to see “The Morgan Girls”. And all the while teaching her girls to cook and clean house and keeping them “straight… or else”. Rita somehow found the time to always be involved near the life of her girls, including Sunday school, Girls Auxiliary (GA’s), youth choirs, Brownies, Girl Scouts, and band boosters. She made sure each of her children had piano lessons and played in the band. The Morgan girls were ever active in churches, including First Baptist Church in Brewton and in Orange Beach while spending summers at Bear Point. Those bookkeeping skills learned back at Grants allowed her to enter the banking business. It was the lead up to a thirty year career helping manage books for the McMillan Trust. Even with the advent of calculators and computers, Rita always preferred an adding machine equipped with a roll of paper on the wheel. You can still clearly hear the buttons pressed by her fingers speedily clicking away. Still, she found time for herself. Rita was a lifelong avid book reader and loved word search puzzles. She often played women’s softball and joined bowling leagues, while at the same time hanging her wash on the clothes lines. Everything was ironed; even pillow cases and Cecil’s boxer shorts. Many a summer day was spent shelling and putting up bushels of peas, butterbeans and corn. So many memories at Bear Point: Days spent at the beach, homemade ice cream and watermelon on the carport, always someone dropping by, Tinkerbelle, and, of course… the cooking. Momma perfected her gumbo, boiled shrimp, and fried fish recipes (thanks to her Louisiana sister-in-law). Christmas Day always included salty chipped beef and cream cheese spread, pecan coated cheese rolls, and two bedrooms worth of desserts. She mastered the art of mass feeding for her big family and for church gatherings. Alabama football and Atlanta Braves baseball games were always on the TV. Momma was a compassionate and loving caregiver to all in her family. In childhood, she cared for her mother, with her sister, Yvonne and later for Jayne and her husband, Cecil. Rita was preceded in death by her father, Elbert Carroll, and her mother, Sarah Gunn Carroll along with ten brothers and sisters; husband, Cecil Wayne Morgan; and daughters, Ramona Jayne Morgan, and Cecilia Wayne Brunson. She leaves behind her devoted sister, Yvonne Vick; daughters Twinette McDonald (Lawrence), Annette Wilson (James Aubrey); son-in-law-Foyel Brunson; six grandchildren, Pam, Dale, Jeff, Daniel, Kelly, Michelle; two step grandchildren; Jason and Talithia; eleven great grandchildren, Sarah, Emma Kate, Maggie, Jacob, Parker, Elliot, Jordan, Asher, Pryce, Mckenzie, and Luciana. Visitation will be held Saturday, July 10, 2021 at 10:00 AM with services beginning at 11:00 AM at Pine Rest Funeral Home, 16541 US 98, Foley, Alabama. Rev. James Aubrey Wilson will officiate followed by interment at Pine Rest Memorial Park. In lieu of flowers, the family requests donations in memory of Nancy Rita Morgan to Alabama Baptist Children’s Home, 2681 Rocky Ridge Lane, Birmingham, Alabama 35216.

Nancy Rita Carroll Morgan, 84, passed from this life on Tuesday, July 6, 2021 in Pensacola after a brief illness. She was a native of Whistler, Alabama and a long time resident of Brewton and Bear Point (now Orange Beach). In her childhood,... View Obituary & Service Information

The family of Mrs. Rita Morgan created this Life Tributes page to make it easy to share your memories.

Nancy Rita Carroll Morgan, 84, passed from this life on Tuesday,...

Send flowers to the Morgan family.