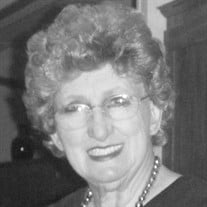 Patricia Ann Sloan Stallings passed away Saturday, June 15, 2019 at her home. Pat was born July 7, 1933 in Madison, Alabama to Lucy Mason Sloan and Homer Sloan. She was a executive secretary for many years before moving to Orange Beach, Alabama.... View Obituary & Service Information

The family of Mrs. Patricia "Pat" Ann Stallings created this Life Tributes page to make it easy to share your memories.

Send flowers to the Stallings family.