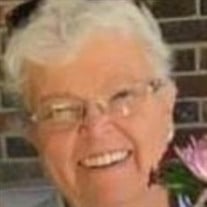 Patricia ("Pat") Eugenia Gordon Eberlein passed away peacefully on Sunday, May 3, 2020 at the age of 80. She is survived by her loving and devoted husband of 60 years, James ("Jim") Weyburn Eberlein, Jr., daughters Dorie (John) Fuller and Andrea (Vance) Gardner, grandchildren Kristin and Sarah Fuller and Drake and Ashlyn Gardner. She was preceded in death by her son, James Weyburn Eberlein, III, and her parents Bill and Doris Gordon. Pat was born in Birmingham, Alabama. She moved with her mother and father at a young age to Mobile, Alabama. She attended school at Linekauf Elementary, Barton Academy, Murphy High School and Auburn University. Pat was a loving wife, mother, Mamoo and friend. She enjoyed her Mardi Gras organizations and social activities. Over a 60 year period, Jim converted her to an Alabama Crimson Tide fan, although during the annual Auburn/Alabama game she always wore her blue and orange Auburn Tiger sweatshirt. Jim met Pat in 1955 when they attended Murphy High School. This was the beginning of a love affair for the ages! They were married in August of 1959 in Mobile, Alabama. Their careers took them to Birmingham, Alabama where they raised their three children. They made many lasting friendships in the Birmingham area. Pat worked for Liberty National Life Insurance Company in Birmingham. She cherished her time in Birmingham because it afforded her an opportunity to rekindle some childhood friendships. In the early 90s she moved back to south Alabama with her husband Jim where they lived for a time in her childhood home in Mobile later moving to Gulf Shores, Alabama where she resided at the time of her death. She particularly enjoyed viewing sunsets on the Little Lagoon in Gulf Shores. She loved the holidays especially Christmas when she was afforded an opportunity to entertain at her home or being with daughters Dorie or Andrea at their homes in Daphne or Birmingham. She was an excellent cook and a meticulous planner when she entertained family or friends. She was an avid soap opera and reality show fan. She also enjoyed the numerous card games that always developed when family was visiting. She adored her four grandchildren and enjoyed talking and bragging about their many accomplishments. She lived life to its fullest and will be missed by so many people. A celebration of life service will be held at a later date (to be announced). In lieu of flowers, the family asks that donations by made to the Myasthenia Gravis Foundation at https://myasthenia.org/.

Patricia ("Pat") Eugenia Gordon Eberlein passed away peacefully on Sunday, May 3, 2020 at the age of 80. She is survived by her loving and devoted husband of 60 years, James ("Jim") Weyburn Eberlein, Jr., daughters Dorie (John) Fuller and Andrea... View Obituary & Service Information

The family of Mrs. Patricia Gordon Eberlein created this Life Tributes page to make it easy to share your memories.

Send flowers to the Eberlein family.