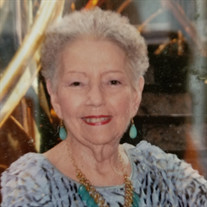 Nancy Wilson Ricks Flynn passed away on Sunday March 17, 2019 in Foley at the age of 86. She and her twin sister Marjorie Wilson Roberson were born in Miami FL to Stewart Kearny Wilson and Caroline Bevington Beall Wilson on November 27, 1932. She is survived by her two sons, Jeffrey Stewart Ricks, Lt Col USAF Ret and his wife Bonnie of Foley; Ralph Earl Ricks and his wife Ronda of Pendleton SC. Nancy had three grandchildren Jeffrey Earl Ricks, Lt Col USAFR of Oveido FL, Curtis Peter Ricks of Foley and Savannah Lee Ricks of Foley. Her four great-grandchildren are the children of Jeffrey Earl Ricks and Kimberly Tolson Ricks and are Jillian Faye Ricks, Jackson Earl Ricks, Emerson Darlene Ricks and Erickson Roy Ricks. Nancy graduated from Miami Jackson High School in 1951 and attended the University of Miami. She was working for the Bell Telephone Company in Miami when she met and married Ewell Earl Ricks Jr. in 1952 who was in the US Navy. After their retirement from the USAF in 1969, the family moved to Foley as permanent residents. Later they moved to Magnolia Springs where Earl passed away in 1987. She later met and married Floyd J. (Mike) Flynn in 1992 who passed away in 1998. Nancy and family were very much a part of the Foley community for several decades. Her first job in Foley was at the Foley Onlooker as a Proof Reader and she later was elevated to the position of Editor. She left that position to become the Communications/Membership Director of the South Baldwin Chamber of Commerce. She later served as the Membership Director for the South Baldwin United Way in Foley. She worked there until her permanent retirement. She stayed very active these organizations and in community activities as a volunteer until her death. Nancy was a member of the Alabama Women’s Press Association where she won numerous local and statewide awards for her work. While at the Onlooker she wrote a long time column “Ricks’ Ramblings”. She also served one term on the Alabama State Board of Tourism. Nancy was the first female member of the Foley Optimist Club and a member of the Fort Boyer Chapter of the DAR. A lifelong Presbyterian, Nancy was a devoted and faithful member of the First Presbyterian Church in Foley until the time of her death.

Nancy Wilson Ricks Flynn passed away on Sunday March 17, 2019 in Foley at the age of 86. She and her twin sister Marjorie Wilson Roberson were born in Miami FL to Stewart Kearny Wilson and Caroline Bevington Beall Wilson on November 27, 1932.... View Obituary & Service Information

The family of Mrs. Nancy Clay Wilson Ricks Flynn created this Life Tributes page to make it easy to share your memories.