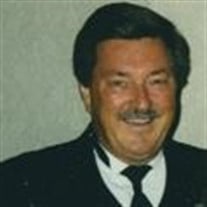 Melvin D. Holborn, 74, died October 5th, 2019 after a seven- month battle with pancreatic cancer. He died at home on Ono Island, AL. He was born February 10th, 1944 in Detroit, Michigan. The son of Earl and Nellie (Vosburg) Holborn. Mel graduated from Charlevoix High School in 1963. Following graduation, he attended North Central Michigan College, Petoskey, MI, and graduated from Northwood Institute with a Bachelor of Business Management in Midland, Michigan. He was married to Joan LaRue for eighteen years. They had two sons, Ty and Chris Holborn. On August 1st, 1987 he married the love of his life, Marilynn Towle Holborn. They were married for 32 years and lived in Hobbs New Mexico until three years ago when they moved to Ono Island in Orange Beach. Mel described it as, “We’ve moved to paradise”! His early business career included working at the Ford Motor Company in Detroit MI and he was a stockbroker and worked in advertising and television. After moving to Hobbs, New Mexico, he owned Holborn Advertising Company. He worked in sales and management at Watson Truck and Supply and Permian Toyota in Hobbs, New Mexico. At the end of his business career he was general manager of sales and production at KPER radio station in Hobbs, New Mexico. Mel was an active member of Hobbs Rotary helping with the foreign exchange program. He was also active in the Hobbs Jaycees, Moose Lodge, Eagles Lodge, Elks Lodge and Commander of the Sons of the American Legion Post #26. After moving to Ono Island he became a member of the Ono Island Men’s Club. He loved helping with the pine straw program and made many great friends. He loved hunting, golf, fishing, spending time on the water with friends, horses and horse racing. He had a love for animals. Before his death and during his battle with pancreatic cancer he took care of every aspect of life for Marilynn’s future. He was one amazing man. May he rest in peace. In addition to his parents he was predeceased by a brother, David. Mel is survived by his wife, Marilynn Towle, Holborn, stepson, Lance (Ginger)Towle of Clovis, New Mexico. Son Ty (Heather)Holborn, grandson Peyton of Manhattan, Kansas. Son Chris (Tracy), grandsons Parker and Pierce Holborn of Manhattan, Kansas. Sister Sherry (Gale) Sheldon of Charlevoix, Michigan. The family would like to thank Dr. Thomas Davidson of Gulf Shores, Dr. McEvoy of Southern Cancer Center, Foley, Comfort Care Hospice of Fairhope and Pine Rest Cemetery of Foley. Memorials may be given to Alabama Gulf Coast Zoo, 1204 Gulf Shores Pkwy, Gulf Shores AL, 36542 or Comfort Care Home Health Hospice, 22502 U.S. Hwy. 98, Fairhope, AL 36532. A Celebration of Life Service will be held at a later date.

The family of Mr. Melvin D Holborn created this Life Tributes page to make it easy to share your memories.

Send flowers to the Holborn family.