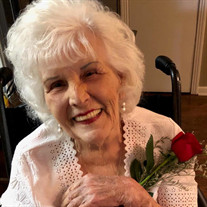 Marylyn Ray Walker, age 86, born in New Orleans, Louisiana on November 19, 1933 and went home to be with the Lord on Easter Sunday, April 12, 2020 at her home peacefully with her family at her side. Marylyn’s younger years were spent in New Orleans and Mobile, settling in Baldwin County where Marylyn retired from Vanity Fair. Marylyn was a most faithful parishioner of St. Margaret’s of Scotland Catholic Church. Marylyn had two true loves, her church and her family and nothing came before either. Her Genuine charm, sincere compassion and often hilarious conversation truly made her a favorite in any room she entered. Marylyn never met a stranger and chose to always see the good in people. Marylyn is survived by her children: Diana Rohe (Kevin) Pennington, Joseph (Linda) Rohe, Jacquelyne Rohe (Aaron “Bruti”) Daniels, Christine Rohe Littleton and Steven M. Walker (Dana Leigh Craig). She is also survived by 18 grandchildren, 26 great grandchildren, 6 great great grandchildren and several nieces and nephews. Marylyn is preceded in death by her parents Raymond and Christine Haag Richardson, her husband, Woodrow Walker a daughter, Cynthia Jean Rohe her brothers, Raymond and Norman Richardson. Pallbearers will be Aaron Bruti Daniels, Kevin Pennington, Steven Walker, Tanner Walker, Wesley Foley, Michael Nelson, honorary pallbearers are Joseph Rohe, Donald, Ronald and Kenneth Weiss. Marylyn will be laid to rest at Pine Rest Cemetery in Foley, Alabama on Wednesday, April 15, 2020. A memorial celebration to greet all of her family and friends will be announced at a later date.

Marylyn Ray Walker, age 86, born in New Orleans, Louisiana on November 19, 1933 and went home to be with the Lord on Easter Sunday, April 12, 2020 at her home peacefully with her family at her side. Marylyn&#8217;s younger years were spent in... View Obituary & Service Information

The family of Mrs. Marylyn Ray Walker created this Life Tributes page to make it easy to share your memories.

Send flowers to the Walker family.