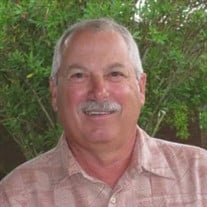 Larry Dean Tyler, resident of Foley, AL since 2007, and former resident of Catlin, IL, went to be with the Lord January 02, 2022, at 78 years of age, due to respiratory illness. He is survived by his wife of 56 years, Jessie Virginia (“Jenni”) Burns, and his Son, Brent Joseph (B.J.) Tyler and wife Emily. Larry is survived by his younger siblings; Phyllis, (the late Robert Lyons) of Catlin, IL and Sharon, (Gary) Tucker of Odessa, FL. His youngest Brother, Randall (Deidre “Dee”) Tyler recently passed away on December 08, 2021 after a long battle with cancer. Larry is also preceded in death by his parents, Ralph and Jennie May Tyler of Tilton, IL. Larry was the Son-in-Law of the late Jesse and Havel Burns of Metcalf, IL. He was Brother-in-Law to the late Melvis and Dorothy Thomas of Smithville, AR; the late Jim and Katherine Young of Metcalf, IL; the late Al and Wanda Wright of Louisville, Ky; David and Janet Thomas of Ridgeland, MS; Rachel Brown of Paris, IL; and Robert (“Bob”) Burns of Paris, IL. Larry was a cherished Uncle to multiple Nieces and Nephews. Larry was born in Danville, IL, and is a graduate of Danville High School. Here he excelled as an athlete in track, football and basketball. He held a school record running the 400m race for many years after graduating. He was nicknamed “Rabbit” due to his speed and competitive excellence in Track. From 1966 – 1970, Larry served proudly and honorably during the Viet Nam Conflict in the United States Air Force where he served as a Veterinary Specialist at Kirkland Air Force Base in Albuquerque, NM. Larry was employed as a Metallurgist at General Motors, Tilton, IL, initially and later became Yard Supervisor. His duties as Supervisor included managing inventory and ordering supplies used in the production of car parts. The relationships he made through his contacts with vendors was a source of great pride for him. Larry worked 33 years for G.M., and when the plant announced its foreclosure, he decided to retire rather than move his family to another state. In retirement, he enjoyed tutoring children for his sister Sharon’s grade school class and playing golf at Vermilion Hills Country Club. Later, for their 35th Wedding Anniversary, he and his wife Jenni purchased a condo in Orange Beach, AL. In 2007, they bought and resided in their dream home in Glen Lakes Golfing Community in Foley, AL. Larry coached Little League Sports in the Air Force and during Brent’s elementary years attending Catlin Grade School. Larry was a loving Father, proud of his Son and always had time to play catch or shoot hoops. Larry was an avid Cardinal Baseball and ILLINI Basketball and Football Fan, holding season tickets and attending games with his wife and parents for many years. He spent his vacations fishing in Cohasset, MN on Long Lake at his parents’ cabin. He and his family loved card playing, especially Euchre, Pinochle, and Poker. In retirement, he enjoyed playing the game Social Security with his wife. He loved gardening and playing with his dog, Fluffy. In 2008, Larry and Jenni became members of Romar Beach Baptist Church. On October 11, 2009, they rededicated their lives to Jesus Christ, Our Lord and Savior, and were baptized in the Gulf of Mexico. Larry loved his church family and served in several different Ministries: 2012 R.B.B.C. Adult Bible Study Teacher; 2015 Head of Kitchen Ministry; 2021 R.B.B.C. Finance Chair, and he served on several instrumental committees in start-up of Canal Road Baptist Church. He was a Choir member, and assisted Jenni with her Wedding Ministry and Church Clerk duties. Larry was bold in his Christian walk, testifying and sharing Jesus wherever he went. On January 02, 2022, Larry passed this life at South Baldwin Medical Center Intensive Care Unit. He will be buried at AL State Veterans Memorial Cemetery at Spanish Fort, AL, 34904 AL Hwy 225, Spanish Fort, AL 36522. A Military Rights Memorial Service is being planned mid- April; - a specific date and time to be announced. Donations may be made to Romar Beach Baptist Church, P.O. Box 128, Orange Beach, AL 36561.

The family of Mr Larry D Tyler created this Life Tributes page to make it easy to share your memories.

Send flowers to the Tyler family.