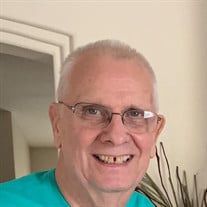 Kenneth (Ken) M. Shortreed, age 76, of Foley, AL, passed away, with his family by his side, on the morning of Thursday, September 3, 2020. He was born on August 9, 1944, in Madison, WI, to Thomas Hiram and Katherine (Schmitt) Shortreed. He graduated from Portage High School on May 31, 1962. After high school, Ken joined the Navy. He served in the Navy from 1962—1966. On October 26, 1968, he married his beloved wife, Mary Pauline Palzkill. Ken loved nothing more than being around his family. He enjoyed grill outs, playing cards, taking trips, talking about his Navy days, and attending his “Wisconsin Club” meetings. He enjoyed all of his mini adventures with his grandson and sharing his historical knowledge with him. He also loved his brothers, sisters, nieces and nephews very much. He loved to talk about his days growing up with all of his 13 brothers and sisters at 218 Washington Street. He always had a smile on his face and lit up every room he walked into. He always would spread love and happiness to everyone he met. To know him, meant you had a friend for life. Ken is survived by his wife, Mary; his daughters, Terri (Bob) Weichert and Brenda Shortreed; and his grandson, Matthew. He is also survived by his brothers and sisters, Gary (Lorna) Shortreed, Duane (Judy) Shortreed, Mary Ellen (Mike) Smith, Sandra (David) Gunderson, Carol (Fred) Krez, Douglas (Bonnie) Shortreed, Leona Shortreed, and Robert (Joan) Shortreed; his sister-in-laws, Muriel Shortreed, Judith Shortreed, Helen Shortreed, Bonnie Shortreed, and Linda Palzkill; many nephews, nieces, grand nephews, and grand nieces. Ken was preceded in death by his parents Thomas and Katherine Shortreed; his brothers: Thomas Shortreed, Donald Shortreed, James Shortreed, and Phillip Shortreed; his twin sister Kathleen Hoppe; his brother-in law Donald Palzkill; and his nephew Kent Shortreed. At this time, due to the current pandemic, there will be no memorial service.

Kenneth (Ken) M. Shortreed, age 76, of Foley, AL, passed away, with his family by his side, on the morning of Thursday, September 3, 2020. He was born on August 9, 1944, in Madison, WI, to Thomas Hiram and Katherine (Schmitt) Shortreed. He... View Obituary & Service Information

The family of Mr. Kenneth "Ken" M. Shortreed created this Life Tributes page to make it easy to share your memories.

Send flowers to the Shortreed family.