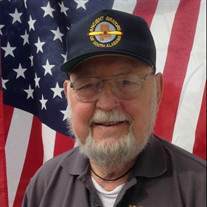 Kenneth John Fletcher, 87, of Gulf Shores, Alabama went to be with his Lord on March 22, 2019. He was at home surrounded with love and prayers by his faithful family. A Celebration of Life will be held April 6 @2:00 p.m. at Gulf Shores United Methodist Church, Gulf Shores, Alabama. Visitation will be following the service in the Auditorium of Gulf Shores UMC. Kenneth was born July 27, 1931 in Jersey City, New Jersey. He is preceded in death by parents John and Beatrice Jacobsen Fletcher. Kenneth is survived by wife of 27 years, Amelia W. Fletcher, children Linda F. Jaikes, John Manning Fletcher, Kimberly Hope Barker, Matthew T. Vinson, and Bethany V. Kersey. His grandchildren include: Shauna Webster, Quinn Webster, Dane Webster, Martin Hartnagel, Aimee Fletcher, Hope Barker Moore, Ryan Barker, Mary Brittian Vinson, Amelia Ann Vinson, Brooke Kersey, Sarah Kersey, and Charles Kersey. Great Grandchildren: Liam Webster, Memphis Singleton, Brody Barker, Jayce Barker, and Harper Moore. Kenneth served his country as a Captain in the Army Corps of Engineers after training in the first flight class at Fort Rucker. He helped map the Territory of Alaska and flew helicopters and fixed wing during his time in service. He loved flying his Piper Comanche over the Grand Canyon and across the country to see friends and family. His degree from the Whiting School of Engineering at Johns Hopkins University set a standard and a career path. With Hercules Chemical Company he moved around the country and served as a representative for his company on the Texas Chemical Council. He had a passion for golf and was a founding member of the Craft Farms community. The highlights of his many golfing experiences were playing Augusta National behind President George W. Bush and playing inaugural rounds of golf at Cotton Creek with R.C. Craft and Arnold Palmer. Many thanks and appreciation go out to the Amedysis Home Health and Community Hospice nurses and staff who cared for Kenneth with so much skill and love. Memorials may be made to Gulf Shores United Methodist Church children’s, music, or servant ministries at PO 374, Gulf Shores, Alabama 36547 or to Johns Hopkins University Whiting School of Engineering, 33400 North Charles Street, Baltimore, MD 21218-2608

Kenneth John Fletcher, 87, of Gulf Shores, Alabama went to be with his Lord on March 22, 2019. He was at home surrounded with love and prayers by his faithful family. A Celebration of Life will be held April 6 @2:00 p.m. at Gulf Shores United... View Obituary & Service Information

The family of Mr. Kenneth John Fletcher created this Life Tributes page to make it easy to share your memories.

Kenneth John Fletcher, 87, of Gulf Shores, Alabama went to be...

Send flowers to the Fletcher family.