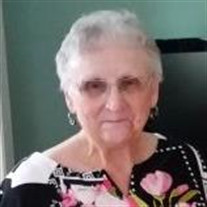 Judith (Judy) Elizabeth Gallier, 79, of Foley, AL went to be with the Lord on February 14, 2020 at Saad’s Hospice Care in Mobile, AL. Born in Birmingham, AL to Rufus Warren and Rena Mae Dial in 1940. She married Gary Lee Gallier in 1958 while he was in the Army, stationed at Fort McClellan in Anniston, AL. She and her husband, Gary, raised a family in several locations while serving in the Army, until his retirement in 1975, They went on to work in camp ministry in several different states over the next 16 years. They then settled down in south Alabama in 1991 to begin working with their son, Mark, until they retired in 2001. She was a member of Grace Fellowship in Foley for several years. Judy is preceded in death by her beloved husband of 60 years, Gary Gallier and her mother, Rena Mae Dailey Dial and father, Rufus Warren Dial. She is survived by her children, Mark (Charlotte) Gallier of Elberta, AL , Lisa (Omer) Yoder of Goshen, IN and Brad Gallier of Foley, AL ; brother, Randy (Linda) Gallier of Naubinway, MI; grandchildren, Jennifer Kulp, Jamie (Paul) Ward, Nathaniel (Charis) Yoder, Aaron (Kate) Yoder, Rachel Gallier, Ashley (Alex) Reynolds and 10 great grandchildren. Visitation will take place Wednesday, February 19th from 4-6 pm and services to follow at 6:00 pm at Pine Rest Funeral Home, 16541 Hwy. 98, Foley, AL. Memorial donations may be made to one of Judy's favorite charities: Samaritan's Purse, Wounded Warrior Project and Pearl’s Memory Babies

The family of Mrs. Judith "Judy" Elizabeth Gallier created this Life Tributes page to make it easy to share your memories.

Send flowers to the Gallier family.