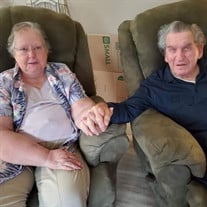 Mr. John Allen McDuffie was born to Mr. Burvin Boykin McDuffie and Mrs. Verna Mae Doggett McDuffie on July 31, 1940. Mrs. Myra Diane Odom McDuffie was born to Mr. William Rufus Odom, Sr. and Mrs. Mary Eve McDaniels Harden Odom on February 09, 1951. Mrs. Odom would later marry Mr. Derwood R. Crowe. John and Diane both were 1 of 9 children (maybe that’s why they got along so well?). At the age of 5, Diane was burned very badly and they thought that she would never walk again. We all know how determined she was at proving the them wrong! She rode a bicycle up and down the hospital halls for therapy! John wanted to serve his country so he enlisted into The Army. He was trained to fly the planes. However, this is where they would find his heart condition and he was told that he couldn’t fly them. He was determined to serve in spite of his condition, therefore he enlisted into The National Guard where he became A Lineman. John would later become A Master Mechanic and A Race Car Driver. He built his car from the ground up and raced it at The Mobile Speedway in Mobile and also at The Five Flags Speedway in Pensacola. He would have a life-changing wreck at Mobile Speedway but he didn’t let that stop him from racing! He actually bought another race car while he was in the hospital healing! Diane would later work at The Jr. Food Store, Vanity Fair, and The Foley Coffee Shop. The coffee shop is where they would meet each other! John and Diane would get Married on July 26, 1970. They raised the 3 of us children with all the love anyone could have ever asked for and they were always there whenever they were needed even as we got older. They loved each other beyond all measures and it spilled over into us! From their Marriage they were blessed with 7 Grandchildren and 15 Great Grandchildren. They brought us up in the ways of the church that started in their living room! They would pour all their hearts and souls into this church which would later have a place to call theirs. They served as The Bus Ministry and also The Jr Church Leaders. They also had A Teen Ministry while there. John later became A Deacon and Diane later became The Secretary of both The Open Door Baptist Church and Christian School. John would later become stricken with the awful diseases of Alzheimer’s and Dementia which would end his Life-long Career as A Master Mechanic/Race Car Enthusiast. Diane would later have to resign from The Secretary for The Open Door Baptist Church in order to become his Caregiver. Momma took great care of Daddy until Their Love Story would tragically, abruptly end with them both being hospitalized at The Thomas Hospital in Fairhope, Alabama with Covid Pneumonia which quite honestly has left us all Heartbroken and Devastated. We lost Daddy on February 17. We lost Momma on February 23…just 6 days later! The one good thing we can say is that at least they are both back together…now.

The family of Mr John Allen McDuffie III created this Life Tributes page to make it easy to share your memories.

Send flowers to the McDuffie family.