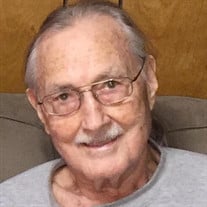 John Francis Hesse, a lifelong resident of Foley, passed away peacefully at Sacred Heart Hospital in Pensacola on Thursday, January 7th, 2021 at the age of 88. He was born at home in Foley on November 11th, 1932 to the late Frances Née Schulte... View Obituary & Service Information

The family of Mr John Francis Hesse created this Life Tributes page to make it easy to share your memories.

John Francis Hesse, a lifelong resident of Foley, passed away...

Send flowers to the Hesse family.