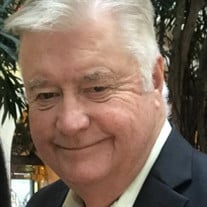 John B. Dioguardi, Jr was born March 30, 1940 to John B. Dioguardi and Josephine Minciel Dioguardi in Glen Cove, New York, where he grew up with his sisters, Joan Dioguardi and Teri Dioguardi Ingalls. In 1960 he married Helen Bleich with whom he had six children: John (1960), George (1961), Pamela (1962), Paul (1963), Matthew (1967), and Christopher (1970). He served in the army from 1959 to 1962 including service in Germany. After serving in the army, he and his family moved to back to the US where he began his career in construction. Among his many accomplishments in his career include the building of the Martin Luther King Center in downtown Atlanta. He leaves behind his beloved second wife, Kassia Melo Dioguardi, who he met while working for Yates Construction here in Gulf Shores AL. Kassia brought to his life a new family and culture from Brazil. He also leaves behind 10 grandchildren, Scott, Michael, George, Hailey, Linzy, Dylan, Luke, Jude, Alex, and Adalynn. Rest In Peace Doc.

The family of Mr. John B. Dioguardi Jr created this Life Tributes page to make it easy to share your memories.

Send flowers to the Dioguardi family.