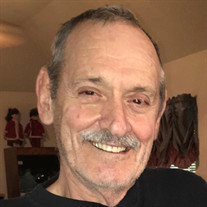 Jimmy Francis Monk, 77, of Foley, Alabama, passed away peacefully on February 9, 2021. He was born in Grove Hill on February 15, 1943, to Francis and Elsie Baugh Monk. He was a devoted husband to Tommyelene Wiggins Monk for 36 years until her death in 1998. Family was important to Jimmy. He and Tommyelene raised three children, and he continued to take care of his mother-in-law after his wife died. Jimmy’s commitment to family was sacrificial. He became more than a grandfather and great-grandfather, but actually a parent again to two grandchildren and two great-grandchildren. Jimmy was a hard worker in his life’s career as a master mechanic technician at Gulf Chrysler in Foley where he retired from in 2013. He developed and perfected his natural talent for servicing cars as a young man working for his father and learning from the best. Jimmy was a man of faith professing that faith as a young man at Bassett Creek Baptist Church. After moving his family to Foley with his job, he became a member of Calvary Baptist Church where he raised his family in the church. Jimmy was preceded in death by his parents, his wife, a brother (Robert) of Ozark, Alabama, and nephews (Daniel Monk of Duluth, Georgia and Jason Bylinowski of Waynesboro, Georgia). Jimmy is survived by his three children: Jimmy (Sabine) Monk of Fletcher, Oklahoma, Darlene Kleinschmidt of Foley, Alabama, and Kim Monk (Tim Langford) of Lillian, Alabama; three siblings: John (Jane) Monk of Duluth, Georgia, Sarah (Mike) Smith of Fulton, Alabama, Laura (Stan) Bylinowski of Waynesboro, Georgia, and Dianne (Robert-deceased) Monk of Ozark, Alabama; four grandchildren: Emily Kleinschmidt of Foley, Alabama, Casey (Philip) Stanford of Foley, Alabama, Seth (Isis) Monk of College Station, Texas, and Sarah Monk of Fletcher, Oklahoma; three great-grandchildren: Jaelyn Campbell, Tyler Campbell, and Cameron Stanford all of Foley, Alabama; an aunt, Laura Cumbie of Grove Hill, Alabama; an uncle, Robert Eloid Baugh of Jackson, Alabama; and six nephews and three nieces. The pallbearers are Andy Monk, Adam Monk, Nicholas Smith, Matthew Smith, Dylan Donovan, and Jack Donovan.

Jimmy Francis Monk, 77, of Foley, Alabama, passed away peacefully on February 9, 2021. He was born in Grove Hill on February 15, 1943, to Francis and Elsie Baugh Monk. He was a devoted husband to Tommyelene Wiggins Monk for 36 years until her... View Obituary & Service Information

The family of Mr Jimmy Monk created this Life Tributes page to make it easy to share your memories.

Send flowers to the Monk family.