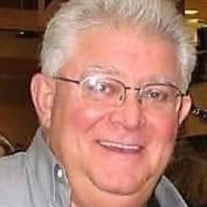 James Albert Bernola passed away on Friday August 28, 2020. Jim was born in Burgettstown Pennsylvania to Albert and Ann Bernola on August 5, 1943. He graduated from Burgettstown High School and then attended Findlay College in Ohio. He was blessed with four children, Kasey Bernola, Abby (Bob) Johnson, Jayme (Steve) Dillon all of Findlay. His son Steve Bernola proceeded him in death. Jim found the love of his life, and never let her go, he married Alice Cox on September 15, 1982. He was the proud grandfather of Chelsy (Bob) Taylor (Fostoria, OH) and Bobbi (Derrell) Hammond (Winder, GA), Haley and Sophia Dillon (both of Findlay OH), he is proceeded in death by a grandson Chaz Johnson and grand-daughter Chantel Johnson. He also was loved by his seven great grandchildren. His sister-in-law Dorothy (Jack) Sutherland survive in Sellersburg, Indiana, and is proceeded in death by his mother-in-law Elizabeth Norris. He worked at Sylvania in Ohio in the early years and moved on to start his recruiting company Technical Search and Recruiters. Years after relocating to Foley Al, Jim retired, but not for long. He found his dream retirement job at The Home Depot in Foley, working there up until his last day. He was member of St. Margaret of Scotland in Foley. His hobbies included hunting, fishing, golfing and especially cooking. He loved keeping his gardens pristine and flowers blooming. And in the fall not a Saturday went by without keeping up with the Louisville Cardinals, and Sunday’s were dedicated to the Pittsburgh Steelers. ‘Jimmy A’ enjoyed the Bernola Family Reunion in Burgettstown PA, visiting with his aunts, uncles and many cousins. With such a big presence, this man never knew a stranger. He was loved by so many, but more important to him he loved more. The family will welcome visitors on Wednesday September 2, 2020 from 1:00 pm – 2:00 pm with a Celebration of his life to follow at Pine Rest Funeral Home, 16541 US 98, Foley Alabama. In lieu of flowers, donations can be made to your local animal shelter.

James Albert Bernola passed away on Friday August 28, 2020. Jim was born in Burgettstown Pennsylvania to Albert and Ann Bernola on August 5, 1943. He graduated from Burgettstown High School and then attended Findlay College in Ohio. He was... View Obituary & Service Information

The family of Mr. James "Jim" Albert Bernola created this Life Tributes page to make it easy to share your memories.

Send flowers to the Bernola family.