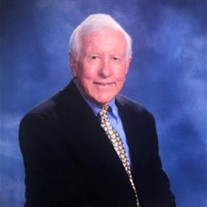 Fort Morgan, Ala., resident Howard Eugene Hinesley died Oct. 9, 2019 in Robertsdale, Ala., age 90. Howard was born in Carbon Hill, Ala., to parents Andrew and Ophelia Hinesley. He was the youngest of seven children. Howard attended Carbon Hill High School, graduating in 1948. He worked for St. Regis and Champion Paper Companies as a transportation manager for over 30 years, living in Pensacola, Fla., Metuchen, New Jersey, and Brookhaven, Miss. He was a veteran, having served with the Air Force during the Korean War. Howard retired to Fort Morgan, Ala., in 1990 and had a wonderful 30-year retirement. He was married to Lavone, the love of his life for 63 years. Together, they have three children, seven grandchildren and three great-grandchildren. His later years were spent volunteering at his church, fishing in the bay, and enjoying visits from family. Howard was a man of faith, going on a mission trip to Russia shortly after the breakup of the Soviet Union in the mid 1990s. With his wife Lavone, he took three trips to Satka, in the Ural Mountains 1,000 miles east of Moscow, to spread God’s word. Howard was filled with kindness, love and compassion, never met a stranger, and always had a smile on his face. He is survived by his wife Lavone, children Phillip (LaDonna) Hinesley of Foley, Ala., daughter Robin Bradley of Fort Morgan, Ala., and son Steven (Sue) Hinesley of Franklin, Tenn. Surviving grandchildren include Nathan (Nenette) Bradley, Maggie Hinesley, Sarah Bradley (Mike) Cotey, Anna Hinesley (Aaron) Orbik, Mary Hinesley, Molly Hinesley, and three great grandchildren Tommy and Ellie Cotey and Madeleine Orbik. Howard was preceded in death by his parents, six brothers and sisters, and grandson James. A celebration of life will be held at the Gulf Shores United Methodist Church on Saturday Oct. 19, at 1900 Gulf Shores Pkwy, Gulf Shores, Ala. Visitation is at 10 a.m., followed by a service at 11 a.m. All are welcome. In lieu of flowers, the family requests donations be made to the Gulf Shores United Methodist Church general fund.

The family of Mr. Howard Eugene Hinesley created this Life Tributes page to make it easy to share your memories.

Send flowers to the Hinesley family.