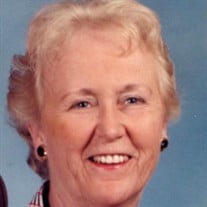 Helen Joyce Van Lierop passed from this life peacefully on August 2, 2020 in Corpus Christi, Texas. Helen was born on August 18, 1930 in Moselle, Mississippi to Charlie Christopher and Arrilla Gatsy Ann Long, and was the youngest of 12 children. When Helen was 6 years old her family moved to Foley, Alabama. In high school Helen worked as a soda jerk for a local drug store, was a cheerleader, and in her senior year was voted most popular girl. Soon after graduation, Helen met her future husband, Jack Van Lierop, and they were married on April 15, 1950. In the early years Helen worked as an operator for Gulf Telephone Company, and while in Foley, she and Jack had 3 daughters, Jacque, Renee, and Rita. In 1964 Jack and Helen moved the family to Blountstown, Florida, the place they called home for many years. Helen quickly became involved in the community, and was instrumental in the opening of the city's first library. The family joined Blountstown United Methodist Church, where they were very involved over the years. Helen enjoyed volunteering with the youth group and serving on various committees. Helen was an excellent cook, avid reader, and loved to entertain. She was happiest when she was with friends and family. The memories of bridge club, fishing trips, fish fries, and poker nights will always be special. Helen was preceded in death by Jack and her grandson, Joshua. She leaves to cherish her memory, her daughters and their spouses, Jacque and Joe Schenk of Corpus Christi, Texas, Renee and Lyn Wheatley of Montgomery, Alabama, and Rita Van Lierop of Acworth, Georgia. There are 6 grandchildren who will miss their Dubbie greatly. They are Brian, Lyndsey, Stuart, Amy, Tim, and Anna, all who were proudly bathed in Dubbie's turkey pot when they were babies. She was also fortunate enough to have 6 great-grandchildren. Helen had a long life that was well lived and leaves behind many special memories. A few of the many lessons that she taught her daughters were that actions speak louder than words, give to those less fortunate, and treat every person with respect. The family would like to express their sincere appreciation to the staff of Holmgreen Center for the excellent care and kindness that they showed to our loved one in her last years. Helen will be laid to rest at Pine Rest Cemetery in Foley, Alabama. Arrangements for a memorial service will be announced at a later date.

Helen Joyce Van Lierop passed from this life peacefully on August 2, 2020 in Corpus Christi, Texas. Helen was born on August 18, 1930 in Moselle, Mississippi to Charlie Christopher and Arrilla Gatsy Ann Long, and was the youngest of 12 children.... View Obituary & Service Information

The family of Mrs. Helen Van Lierop created this Life Tributes page to make it easy to share your memories.