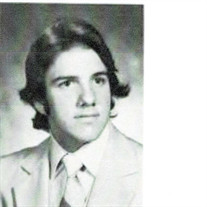 Not sure what to send?

Hector Robert Murray, most recently of Houston, Texas, passed away suddenly on March 31, 2022, at the age of 59. Born in Massena, New York in 1962 to Maurice and Anita Murray, Hector attended Massena Central High School, championing as a sophomore and senior class hockey team goalie, graduating with a hockey scholarship in the class of 1980. Showing an early interest in mechanical device operation and repair, his room was often cluttered with the internal components, and neighbors at that time would remember his entrepreneurial repair shop run from the family garage. He loved summer camping on the small islands on the St. Lawrence river, along with his passion for working with horses at a local stable. Following graduation Hector enlisted in the U.S. Navy, becoming a veteran of the first Gulf War, specializing as an Electronic Warfare Technician. The conjunction of mechanical and technical skills coalesced into a prodigious ability with computer technology. Hector was a seasoned specialist in plasma technology, working with plasma cutting systems, training, installing, and design, traversing nationally and internationally, with a primary focus in the southern United States, operating centrally from Houston, Texas. Hector had a decades long passion for the upkeep and repair of vintage Volvos. He enjoyed dancing, cribbage, a wide variety of music, and was a devoted cine fan of the 1982 "Blade Runner." He was a Friend of Bill. He is predeceased in death by father Maurice, mother Anita, and son Drew; and mourned by son, Nick Murray; sister, Carol [Michael]; brother, Charles; and sister, Kathleen. He is survived by a loving grandchild, cousins, nieces, nephews, former spouses, and a host of long-time friends and acquaintances. What all of us will remember will be his enthusiasm, keen intelligence, wide smile, and as a baby, a giggling joyfulness. May God be merciful to you Hector. Cremation having taken place immediately, a commemorative Mass will be held at St. Mary of the Fort, Roman Catholic Church, Fort Covington, New York, on July 15, 2022 at 8:30 AM. Flowers may be sent. Alternatively, donations may be made to The National Suicide Prevention Hotline [https://suicidepreventionlifeline.org/].

Hector Robert Murray, most recently of Houston, Texas, passed away suddenly on March 31, 2022, at the age of 59. Born in Massena, New York in 1962 to Maurice and Anita Murray, Hector attended Massena Central High School, championing as a... View Obituary & Service Information

The family of Mr Hector Robert Murray created this Life Tributes page to make it easy to share your memories.