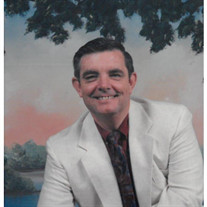 Harold Prentiss Edmonds, loving husband, father, grandfather, and great-grandfather, went home to be with his Lord and Saviour, Jesus Christ, on Wednesday, June 16th, 2021 at his home in Foley, Alabama after an extended illness. He was 77. Harold Edmond’s was born on December 15th, 1943 in Mobile, Alabama. He was preceded in death by his parents, Prentiss Oran Edmonds and Jeanne Elizabeth Edmonds (Williams). He is survived by his wife, (Cricket) Patricia Louise Edmonds (Carter), of 23 wonderful years of marriage. Harold Edmonds served in the United States Airforce during the Vietnam Era. He loved being a provider for his family and had a strict work ethic. Mr. Edmonds worked with the railroad company for 13 years, Woerner’s for 21 years and his most recent place of employment was Domino’s for 8 years. He dedicated his life to Jesus Christ first and foremost, his wife (Cricket) Patricia Edmonds, his family, and then Alabama football. Roll Tide. Harold taught his family of the tremendous love of Jesus Christ. He was sure steady and the epitome of loyalty. As he had no biological children of his own, he raised and had many adopted children. Mr. Edmonds is survived by sons, Rodney, Eric Baldwin, Randy Howell, Larry Morrison and daughters Belinda Gay, Wynee, Sandra Howell, Amanda Howell, and Katelynne Rountree. Harold is survived by one cousin Larry Williams of Mobile, Alabama. He leaves behind grandsons, Rodney Jr., Eric, Jefferson, and Dustin Bellamy as well as granddaughters, Mc Kenzie and Daphne this also includes his great granddaughters Grace and Nevaeh. Harold Prentiss Edmonds will be dearly missed, although we know he is with his Father in Heaven.

Harold Prentiss Edmonds, loving husband, father, grandfather, and great-grandfather, went home to be with his Lord and Saviour, Jesus Christ, on Wednesday, June 16th, 2021 at his home in Foley, Alabama after an extended illness. He was 77. Harold... View Obituary & Service Information

The family of Mr Harold Prentiss Edmonds created this Life Tributes page to make it easy to share your memories.

Send flowers to the Edmonds family.