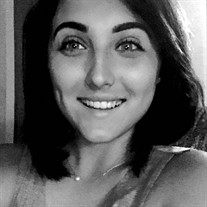 Hadyn Lynn O’Cain Griffin, beloved and cherished daughter of Jimmy Lynn O ‘Cain Jr. and Aimee Griffith O’Cain, was born November 26, 1995. She was born in Bay St. Louis, Mississippi, and moved to Foley, Alabama, in 2005. Hadyn graduated from Foley High School in 2014 and attended the University of West Alabama, where she graduated in May of 2019, with a degree in Biology. Hadyn married Tyler Blake Griffin of Winfield, Alabama, in May of 2019, and the couple moved to Carrollton, Georgia, where Tyler attended the University of West Georgia and Hadyn worked as a dental assistant at White Oak Pediatric Dentistry in Newnan, Georgia. Hadyn was currently studying to enter dental school upon Tyler’s graduation May 2020. Hadyn loved life, people, and any animal she ever came across. There was never a person or animal she met that was allowed to be a stranger for long. Her smile was infectious and paired with her beautiful blue eyes, lit up any room she entered. Hadyn was an amazing friend, daughter, sister, and wife, and would never allow anyone to be in a bad mood. She made huge impacts on everyone she met and is truly unforgettable. She will be forever missed by anyone lucky enough to have known her. Hadyn is preceded in death by her grandparents Laura Piazza Griffith, William Griffith, Jr. of Bay St. Louis, Mississippi, and Kathy Gillette of Jackson, Mississippi. Hadyn is survived by her husband Tyler, parents Jimmy and Aimee, sister Hope O’Cain, brother Iain O’Cain, grandparents Jimmy O’Cain Sr. and Gaylene O’Cain, and numerous aunts, uncles, cousins, and friends. Hadyn was talented in everything she did. She was a part of the Foley and West Alabama Band programs. She was a dancer, held lead roles in numerous stage performances, was an avid singer, and much more. Hadyn served as the Drum Major for the UWA band in 2018 and even was a member of the UWA tennis team. Hadyn was involved in several organizations including Alpha Sigma Alpha sorority, Phi Boota Roota percussion fraternity, Alpha Psi Omega National Theatre Honor Society, and Beta Beta Beta Biological Sciences Honor Society.

The family of Mrs. Hadyn Lynn O'Cain Griffin created this Life Tributes page to make it easy to share your memories.

Customized sympathy cards. Mailed for you.