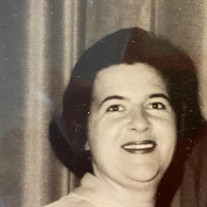 Grace Adele Russi Bunker, 90, passed away peacefully in the presence of family on Tuesday, August 3, 2021, after suffering from a long and difficult progressive disease which had debilitated her for many years. She lived for over 27 years in her beloved home on DeWitt Circle in Lake Forest, Daphne, where she and her loving husband Lee, enjoyed entertaining friends and family until his early death in 2002. In 2019 she moved into an apartment in Daphne where she was cared for lovingly until she went into a nursing facility in May 2021. Grace was known for her wonderful sense of humor, her wit and her caring ways. She enjoyed her many friends throughout the years, and adored her grandchildren, cherishing every moment she was able to spend with them. Before she married she worked as a grade-school teacher, a profession she loved and often recalled fondly. Grace is preceded in death by her husband, Leo M. Bunker, and her parents Carmen Russi and Ruth Hoffman. She is survived by her daughter, Cynthia Jean Bunker of Capellenhagen, Germany, her son, Lee James Bunker, of Delano, Minnesota, and her grandchildren Eric Bunker, Michael Bunker, Aaron Bunker, Allison Bunker and Jenna Grace Bunker. The family would like to especially thank Grace’s wonderful long-time caregiver and beloved friend, Maxine, as well as the caregiver team including Margaret and Tiffany and others, for their amazing and dedicated care over all the years. We would also extend our gratitude to the nursing team on floor 2300 of Thomas Hospital as well as the staff of Saad’s Hospice Retreat in Mobile. Visitation will take place on Monday, August 9th, at 10 a.m., followed by a memorial service at 11 a.m., at Pine Rest Funeral Home, 16541 US Hwy 98, in Foley, Alabama.

Grace Adele Russi Bunker, 90, passed away peacefully in the presence of family on Tuesday, August 3, 2021, after suffering from a long and difficult progressive disease which had debilitated her for many years. She lived for over 27 years in... View Obituary & Service Information

The family of Mrs. Grace Adele Bunker created this Life Tributes page to make it easy to share your memories.

Grace Adele Russi Bunker, 90, passed away peacefully in the presence...

Send flowers to the Bunker family.