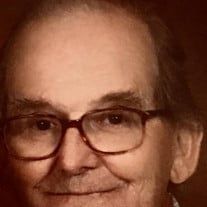 Gerald Talmadge McCook, age 81, passed away in Fairhope, Alabama, on Wednesday, February 20, 2019. He was born on June 1, 1937, in Fitzgerald, Georgia, to Augusta and Waldo McCook. Gerald attended school in Fitzgerald and was a graduate of Fitzgerald High School. He graduated from South Georgia Technical College with a degree in electrical engineering and pitched for the school’s baseball team. On December 10, 1962, he married Gwendolyn Thomas. Gerald worked as chief engineer at both WALB – 10 in Albany, Georgia, and WLCY – 10 in Tampa, Florida. He spent several years doing contract work across the United States rehabilitating television stations and building several television stations. He loved the Georgia Bulldogs and the Atlanta Braves, and served as coach for Pony League baseball in Florida for several years. Returning to Georgia to retire, Gerald became very active at Pine Level Methodist Church and enjoyed teaching Sunday School. He was an animal lover. Gerald is survived by his beloved wife of 56 years, Gwen; his daughter, Dawn Mosley (Tod); sons Tony McCook, Michael McCook (Derenda), and John McCook (Stephanie); eight grandchildren and two great-grandchildren; his sister, Betty McCook, and many cousins, nieces, and nephews. He is predeceased by his brother, Charles McCook (Joan). A memorial service will be held on Saturday, March 16, 2019, at 2 p.m. at Pine Level Methodist Church in Fitzgerald. Lunch will be provided at the church starting at noon. In lieu of flowers, the family requests donations be made in Gerald’s name to: Pine Level Church c/o Ms. Joyce Bishop 502 Oriole Road Fitzgerald, Georgia 31750 “…I am the resurrection and the life. Whoever believes in me, though he may die, yet shall he live…” John 11 v. 25

Gerald Talmadge McCook, age 81, passed away in Fairhope, Alabama, on Wednesday, February 20, 2019. He was born on June 1, 1937, in Fitzgerald, Georgia, to Augusta and Waldo McCook. Gerald attended school in Fitzgerald and was a graduate of Fitzgerald... View Obituary & Service Information

The family of Mr Gerald Talmadge McCook created this Life Tributes page to make it easy to share your memories.

Send flowers to the McCook family.