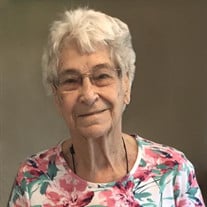 Georgia Matilda “Tildie” Gardner, 91, passed away September 13, 2021. Born Georgia Matilda Hayes on March 31, 1930, in Liberty County, Florida, she married J.C. Garner and they reared their three children there. The family was active in Rock Bluff Assembly of God Church. After the death of J.C. Garner in 1979, she married Paul Ray Powell in 1983 and they moved to Bagdad, Florida. After the death of Paul Powell in 1990, she married Clifton Gardner in 1992 and moved to Elberta, Alabama. She was an active member of Freedom Now Christian Fellowship in Elberta. After the death of Clifton Gardner, she continued to live in Elberta until 2018 when, due to failing health, she moved to Tallahassee, Florida with her son and daughter-in-law. In 2019, she became a resident at Tapestry Senior Living on Walden Road in Tallahassee where she lived until her death. She is preceded in death by three husbands, J.C. Garner, Paul R. Powell, and Clifton P. Gardner; a daughter, Julia Anne Rickards; a granddaughter, Michelle Rickards, and a grandson, Michael Rickards. She is survived by a son-in-law Rev. D. Wayne Rickards, a son Johnny L. Garner and his wife Lois, and a daughter Juanita Grimes and her husband Larry; Grandchildren Jason Garner and his wife Amanda, Suzanne Watson and her husband Jonathan, Shelton Gilliland and his wife Mona, Timothy Gilliland and his wife Melanie; 8 great grandchildren: Benjamin Garner, Mary Rose, Chloe, and Grant Watson, Anna Barfield and her husband Daniel, Elyssa and Nate McCallum, and Makenzie Gilliland.

The family of Mrs. Georgia Matilda Gardner created this Life Tributes page to make it easy to share your memories.

Send flowers to the Gardner family.