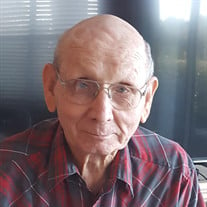 Retired Lt. Col. Gary Lee Gallier, 85, of Foley, AL went to be with the Lord at 12:30 am on July 31, 2019 at South Baldwin Regional Medical Center. Born in Weston, OH to Donald and Mildred Gallier in 1934, he spent the first part of his life on the family farm. After graduating from Wheaton College in 1955 with a degree in chemistry, he began a 20 year military career with the Army. He married Judith Dial in 1959 while teaching at Fort McClellan in Anniston, AL. He served with distinction while being deployed to Korea and Viet Nam. He retired in 1975 from NORAD in Colorado Springs, CO. He and his wife, Judy, went on to work in camp ministry in several different states over the next 16 years. They then settled down in south Alabama in 1991 to begin working with their son, Mark, in his heating and air conditioning business. They retired in 2001 when the business was sold. He served as an elder in his church, Grace Fellowship in Foley for several years. Throughout his lifetime he enjoyed the outdoors, camping, hiking, hunting and fishing. He was a generous person, always helping others and never knew a stranger! He loved the Lord and looked forward to this day when he would join him. He will be dearly missed by all who knew him. He is survived by his wife of 60 years, Judy; children, Mark (Charlotte) Gallier of Elberta, AL , Lisa (Omer) Yoder of Goshen, IN and Brad Gallier of Foley, AL ; brother, Randy (Linda) Gallier of Naubinway, MI; grandchildren, Jennifer Kulp, Jamie (Paul) Ward, Nathaniel (Charis) Yoder, Aaron (Kate) Yoder, Rachel Gallier, Ashley (Alex) Reynolds and 9 great grandchildren. Visitation will take place Sunday, August 4th from 5-8 pm and services on Monday, August 5th, 10:00 am at Pine Rest Funeral Home, 16541 Hwy. 98, Foley, AL. A full military honors burial service will follow in the Alabama State Veteran's Cemetery, 34904 State Hwy. 225, Spanish Fort, AL 2:30 pm. Memorial donations may be made to one of Gary's favorite charities: Samaritan's Purse, Salvation Army, The Alzheimer's Assn., St. Jude's Children's Hospital, American Cancer Society and the Wounded Warrior Project

Retired Lt. Col. Gary Lee Gallier, 85, of Foley, AL went to be with the Lord at 12:30 am on July 31, 2019 at South Baldwin Regional Medical Center. Born in Weston, OH to Donald and Mildred Gallier in 1934, he spent the first part of his life... View Obituary & Service Information

The family of Lt. Col. Gary Lee Gallier created this Life Tributes page to make it easy to share your memories.

Send flowers to the Gallier family.