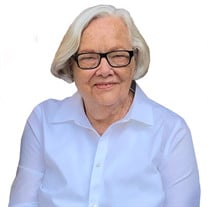 Frances Underwood Lager, age 91, a native of Summerdale, Alabama, and a life long resident of Foley, Alabama, passed away peacefully after a brief illness on Monday, January 3, 2022 with family by her side. Fran was preceded in death by her husband, James Edward Lager who she wed in 1955, her parents and four siblings. Fran grew up on a farm in Summerdale and described herself as a proud farmer’s daughter who enjoyed being outdoors in the sunshine. She graduated from Foley High School in 1948. After completing business school in Montgomery, Alabama, she began her career at Riviera Utilities. Fran worked until age 82 as an underwriter for Baldwin Mutual Insurance Company in Foley. Fran was dedicated to the local community and volunteered with Relay for Life and the Foley Performing Arts Center. She served on the board of the Foley Library for decades and was an avid reader. She will be remembered for her sharp intellect and wit, warm caring nature and support of Auburn football. Her grandchildren were the light of her life. She cherished being with them and supporting them as they grew into young adults. Fran is survived by her daughter, Mary Frances Lindstrom (David) of London, England; son, James Edward Lager Jr (Jacquie) of Marietta, Georgia; granddaughters, Emma Marie Lager of Charleston, South Carolina, Katherine Frances Lager of Marietta, Georgia, and grandson, James Edward Lager III of Marietta, Georgia as well as several cousins, nieces and nephews. The funeral will be held at Pine Rest Funeral Home in Foley on Friday, January 7th at 11:00 AM followed immediately by a graveside service. The family will receive relatives and friends for visitation at 10:00 AM. In lieu of flowers the family asks that donations be made to the American Cancer Society or American Heart Association.

Frances Underwood Lager, age 91, a native of Summerdale, Alabama, and a life long resident of Foley, Alabama, passed away peacefully after a brief illness on Monday, January 3, 2022 with family by her side. Fran was preceded in death by her... View Obituary & Service Information

The family of Mrs. Frances Underwood Lager created this Life Tributes page to make it easy to share your memories.

Send flowers to the Lager family.