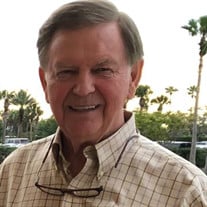 Ernest Walker White went to be with his personal Lord and Savior, Jesus Christ, on January 12, 2021. He owned and operated the Pro Golf Discount in Gulf Shores, Alabama, and enjoyed many loyal customers and friends through the years who lived in the communities of Foley and Gulf Shores. Ernest “Ernie” White was born on November 14, 1943 to Ernest Sr. and Doris White in Newport News, Virginia. His family moved to South Carolina when he was young where he participated in school athletics and was a talented baseball player in high school. He graduated from Hartsville High School in South Carolina in 1962. He married the love of his life, Lois Stewart, in 1962 in Hartsville. He always had an interest in electronics and, while serving in the United States Air Force, was able to obtain a degree in electrical engineering from NC State. The Lord blessed Ernie and Lois with two beautiful girls, Ginger and Nicole, while living in North Carolina. Ernie used his knowledge and skills in electrical engineering for work in the lighting industry and this eventually led to a move to Tupelo, Mississippi. After the girls completed high school in Tupelo, the Whites moved to Foley, Alabama, and Ernie began another career as owner of Pro Golf Discount in Gulf Shores. He enjoyed serving customers and friends at Pro Golf Discount and had a strong interest in using technology to personalize golf clubs specifically for each player so such a difficult game could be more enjoyable. He really enjoyed helping people improve their golf game. He had an interest for many different sports but had a passion for baseball and was a fan throughout his life. He was interested in cars and their mechanics but had a growing interest with electric and computer technology and studied the computer’s role in operating automobile engines. He never lost his passion for lighting and other electrical technologies and would often serve his church and community with his knowledge and skill in this area. He accepted Jesus Christ as his Lord and Savior early in his life and maintained a passion for presenting the gospel of Jesus Christ to everyone willing to listen. Over his life, he was directly involved in church planting and was used by the Lord to start Christian elementary schools in both Tupelo, Mississippi, and Gulf Shores, Alabama. He has held leadership roles in church communities over the years including the office of deacon and elder. He studied the scriptures and often said that the truth in scripture was what God wanted us to know about Him. When difficult questions arose in life, he would try to search scripture for the answers. He was an active member of First Baptist Church of Gulf Shores, Alabama, where he served as the chairman of the child development center team and chairman of the stewardship team. He was active on the building and planning committee for the Children’s Development Center. He was on the Sunday morning greeters team. He also organized and led the Sunday morning pre-worship prayer time. Ernie White is survived by his wife of 58 years, Lois, his two daughters, Ginger and Nicole, and four granddaughters, Jessica, Emilee, Jordan, and Eliza. There will be no funeral service due to the pandemic and only a private family graveside service is planned. The family asks that, in lieu of flowers, any donations be made to the new Christian Growth Center-Children’s Wing at First Baptist Church of Gulf Shores, Alabama. “I have fought a good fight, I have finished my course, I have kept the faith: Henceforth there is laid up for me a crown of righteousness, which the Lord, the righteous judge, shall give me at that day: and not to me only, but unto all them also that love his appearing.” 2 Timothy 4: 7-8 KJV “God is our refuge and strength, a very present help in trouble.” Psalm 46:1 KJV

Ernest Walker White went to be with his personal Lord and Savior, Jesus Christ, on January 12, 2021. He owned and operated the Pro Golf Discount in Gulf Shores, Alabama, and enjoyed many loyal customers and friends through the years who lived... View Obituary & Service Information

The family of Mr Ernest "Ernie" Walker White Jr created this Life Tributes page to make it easy to share your memories.

Ernest Walker White went to be with his personal Lord and Savior,...

Send flowers to the White family.