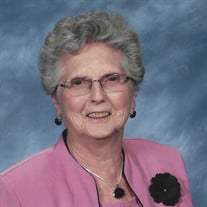 Elinor Ruth (Rockett) Ferguson, aged 96, departed this life to be with her Lord and Savior, Jesus Christ, on July 21, 2021. She was born in Birmingham, AL on August 8, 1924. She met her beloved husband, Wilbur (Bill) Ferguson at West End High School. After a wartime courtship while he served in the Pacific, they were married December 31, 1943. After the war, they settled in Birmingham, where they lived until 1959, when they moved with their 2 children to Sheffield, AL. She was active with the youth at the First United Methodist, with the Sheffield High School Band and the March of Dimes. After 12 years they returned to Birmingham where she continued her work with the youth at her church and later became a foster mother to 5 teenagers. She and Bill moved to Bon Secour, Alabama, when he retired from Belllsouth in August 1982. They were members of Grace Fellowship PCA Church where Bill served as a elder and Elinor enjoyed working with Bible School, the youth and singing in the choir. She had a deep, abiding love for her Savior and for others, which blessed everyone who came in contact with her. She is survived by her daughter Linda (Charles) Gray, son Robert Lawrence (Cheryl) Ferguson, granddaughter Jennifer (Jason) Cole, grandson Jeremy (Holly) Gray, foster son Victor Smith, foster daughter Chris (Bob) LaFerriere, and six great-grandchildren—as well as a niece and 2 nephews. She was preceded in death by her husband of 73 years, as well as her brother, Robert Carson (Renie) Rockett Jr. and parents Robert Carson Rockett and Myrtus (Summerhill) Rockett. “Precious in the sight of the Lord is the death of His godly ones.” Psalms 116:15

Elinor Ruth (Rockett) Ferguson, aged 96, departed this life to be with her Lord and Savior, Jesus Christ, on July 21, 2021. She was born in Birmingham, AL on August 8, 1924. She met her beloved husband, Wilbur (Bill) Ferguson at West End... View Obituary & Service Information

The family of Mrs. Elinor Ruth Ferguson created this Life Tributes page to make it easy to share your memories.

Send flowers to the Ferguson family.