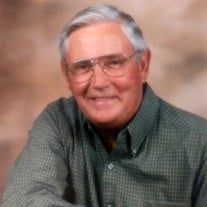 Don Herbert Gipson, age 84, of Summerdale, AL went home to heaven on Monday, September 7, 2020 while surrounded by his family. He was born September 18, 1935 in McKenzie, AL to Pleasant and Beatrice Gipson. In June 1951 he met the love of his life, his true soul mate, Leona Stinson. They were married March 13, 1954 and a real-life love story began. They moved from Butler County, AL to Pensacola, FL. She went to work at Chemstrand, and he went to work for Daniel’s Construction Company and learned the art of brick masonry. 60+ years later he retired from his very own company, D&L Masonry. Many hospitals, schools, government buildings throughout Alabama including the state capitol and Fort Conde show his work. Four children were born to Don and Leona: Donna (Terry) Armstrong, Lisa (Johnny) Thompson, Patricia (Joe) Dykes and Don JR (Jenny) Gipson. He was also greatly blessed with 12 grandchildren, 26 great grandchildren, 9 great, great grandchildren and 9 nieces and nephews. His family was his greatest treasure. Patriarch of the entire Gipson family was his role. He had many names, Don, Daddy, Granddaddy, Uncle Don, Mr. Don, and Mr. Gipson. He was a man that influenced his surroundings and those that he met. He was a member of Summerdale First Baptist Church. A man of strong convictions and a tender heart, quick to love and slow to anger, quick to “wipe the slate clean” of offenses and money owed. He loved family holidays, Mama’s cooking, gardening, anytime on the tractor (especially with his grandchildren), giving advice, Alabama football (especially with his boys), sitting on the front porch and holding the hand of the love of his life. He will be missed every day for the rest of our lives. He is preceded in death by his parents, Pleasant Gipson and Callie Beatrice (Hammack) Gipson; Two sisters, Mildred (Leonard) Parker and Ruth (Luther) Smith; two brothers, Glen (Opal) Gipson and Kenneth (Faye) Gipson; and one nephew, O’Neal Gipson.

Don Herbert Gipson, age 84, of Summerdale, AL went home to heaven on Monday, September 7, 2020 while surrounded by his family. He was born September 18, 1935 in McKenzie, AL to Pleasant and Beatrice Gipson. In June 1951 he met the love of his... View Obituary & Service Information

The family of Mr Don Herbert Gipson created this Life Tributes page to make it easy to share your memories.

Send flowers to the Gipson family.