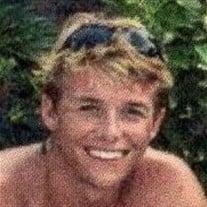 Denton Carroll Dossett, cherished and beloved son of Regena and Michael Dossett, as well as his biological father Christopher Sharp, was born on August 17, 1995, in Jackson, Mississippi, and died suddenly on December 7, 2019, in Foley, Alabama. Denton spent his early childhood in Jackson, Mississippi, then moved to Foley, where he has lived ever since. Denton’s surviving family includes his parents, Mike and Regena Dossett, and biological father Chris Sharp; his younger twin brothers, Cooper and Cullen Dossett; his maternal grandparents, Betty Jean Johnson and Billie Gene Johnson; his paternal grandmother Mary Jo Sharp, and his many loving aunts, uncles, and cousins. A loyal, fun-loving friend and a fast learner, Denton was energetic, adventurous, and optimistic. He was a letterman athlete in school, playing football, baseball, and golf. From an early age, he was intrigued by technology systems and design, and confident in his ability to forever strive for improvements and shortcuts. Friends and family will attest, this creativity could occasionally manifest itself into mischief, but Denton’s imagination was endless and his beautiful smile ever-present. He was without a doubt “curious, inquisitive and “seeking the other side of the hill, … [for] a tale worth telling” (Alastair Reid, “Curiosity”). He was a sweet, gentle soul, a rescuer of strays, and a loving son, brother, and grandson. He often sought solace at Orange Beach where he often returned between careers to work Beach Service, a place where he always felt at home. When he was not working, he would still retreat there to surf, skim-board, or fish. Although Denton left us too soon, we will honor those memories and the sunny days we spent together.

Denton Carroll Dossett, cherished and beloved son of Regena and Michael Dossett, as well as his biological father Christopher Sharp, was born on August 17, 1995, in Jackson, Mississippi, and died suddenly on December 7, 2019, in Foley, Alabama.... View Obituary & Service Information

The family of Denton Carroll Dossett created this Life Tributes page to make it easy to share your memories.

Denton Carroll Dossett, cherished and beloved son of Regena and...

Send flowers to the Dossett family.