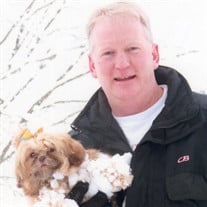 Christopher George McKee ran into the arms of Jesus on Saturday, May 11, 2019. He battled ALS for over 4 years, fighting with everything he had within him. He is survived by his wife, Michelle (Brockett), and four sons, CJ, Scott, Tommy and Jack. He is preceded in death by his father, Walter S. McKee Jr. and mother, Mary Haas McKee, both from Rockville, Maryland. He is survived by four brothers, Walt McKee III (Juliana) from Olney, MD Mike McKee from Woodbine, MD Scott McKee (Daphne) from Ijamsville, MD Gary McKee (Laura) from Urbana, MD Survived by a large extended family, including numerous nieces and nephews, along with many close friends that were considered family. Chris was born in Dover, Delaware and raised in Rockville, MD. He graduated from Wootton High School. He had a bachelors degree in finance from the University of Maryland and a degree in Construction Management from Montgomery College. He met his wife Michelle while living in Highlands Ranch, CO during the years of 1995 and 2000. They moved to Maryland in the fall of 2000. He was in the construction industry for over 25 years. He owned McKee Construction Company Inc. located in Darnestown Maryland for 15 years and closed his business in 2015 due to his ALS diagnosis. He and his family moved to Foley Alabama after he became disabled from ALS. He was an active church member at Genesis Church in Gulf Shores, AL. His valiant fight with ALS proved him to be our hero, duly named Superman by Dr. John McAtee, on the day that he died. Not all heroes wear capes, some ride in wheelchairs with infectious smiles like Chris. His family would like to thank South Baldwin Regional Medical Center in Foley, Alabama, under the care of the compassionate Dr. McAtee, for their commitment to giving him the utmost care over the last few years. He will forever be remembered in the hearts of many and his legacy will live on in the lives of his 4 sons. In lieu of flowers, please consider making a donation to the ALS Association in memory of Chris McKee. He dreamed of a day that a cure would be found for ALS so there would be no more suffering and loss due to this horrific disease.

Christopher George McKee ran into the arms of Jesus on Saturday, May 11, 2019. He battled ALS for over 4 years, fighting with everything he had within him. He is survived by his wife, Michelle (Brockett), and four sons, CJ, Scott, Tommy and... View Obituary & Service Information

The family of Mr Christopher George McKee created this Life Tributes page to make it easy to share your memories.

Christopher George McKee ran into the arms of Jesus on Saturday,...

Customized sympathy cards. Mailed for you.