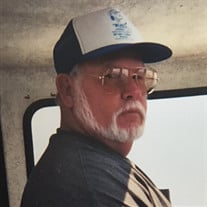 Charles H. King Jr. Dad, Papa, Captain Charles, 76 years old went to be with the Lord April 5th, 2019 at his home in Gulf Shores, AL. surrounded by love ones. Charles was born February 7, 1943 in Morgan City LA. to Charles H. King Sr. and Margorie Minton King. He grew up in Gulf Shores, AL and spent most of his life there. He was a Foley High School graduate of the class of 1961. He had a love of all sports and played football, basketball and baseball for Foley. He was voted Most Athletic his senior year. After graduating high school, he attended Troy University on a basketball scholarship before returning home to help his father in the shrimping industry. Charles followed in his father’s footsteps, giving his life to shrimping. Through hard work and determination, he accomplished his dream of owning his own boat the “Trojan”. After a life long career in the shrimping industry he spent a few retirement years charter fishing. He had a love like no other for the Gulf of Mexico. Charles loved hunting and spending time with his nephew Jimmy. He was an Alabama football fan through and through. “Roll Tide” Charles was a dedicated family man with much pride for his family. He was a Christian man and raised his children in a Christian home. Charles married Linda Lipscomb King and had 3 children; Dana, Christi and Brandon. In 1999 he married Marie Bass and gained two bonus daughters Christine and Karen. He is survived by his loving wife, Marie King, 3 children; Dana King, Christi Koehle (Kyle), Brandon King (Jessica), and two bonus daughters, Christine Gaar (Brett), Karen Harmon (Keith). Grandchildren; Britton Frey (Travis), Blake Norris (Chloe), Koda King, Trace King, Kaiden Ingram, Keller King, Kinsley King, Corey Popp, Haley Gaar, Abby Gaar, Garrett Gaar, Connor Harmon, Kara Grace Harmon, 4 great grandchildren; Rylan Norris, Edward Norris, Karis Phillips, Claire Popp. Sister; Lavanda Cloer. Proceeded in death by his parents Charles H. King Sr, Margorie Minton King, sister, Rosa Perry Miller, granddaughter, Kristina Koehle. He was and is loved by so many other family and friends. Services will be held at Pine Rest Funeral Home in Foley, AL, Tuesday, April 9th. Visitation will begin at 12:30pm with the service following in the chapel at 2:00. Graveside following immediately after. Flower memorials can be made to Pine Rest Funeral Home. In lieu of flowers, memorial donations can be made to Rock Steady Boxing – Fighting Back Against Parkinson’s, P.O. Box 2042, Gulf Shores, AL 36542. We hope to establish a caregiver scholarship in honor of Charles King. [email protected]

The family of Mr. Charles H King Jr created this Life Tributes page to make it easy to share your memories.

Send flowers to the King family.