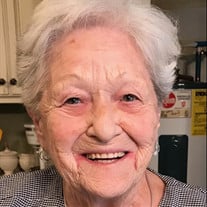 Catherine went home to be with the Lord on November 2, 2019. She and her late husband George resided in Baldwin County, Alabama since the mid-1980’s and were members of St. Margaret’s Catholic Church in Foley. Catherine was born in Davenport, Iowa to parents Melvin John York and Catherine Edna (Herber) York. She was one of sixteen children, the oldest of nine daughters. She met her husband George during a blind date set up by their friends. Catherine wasn’t paired with George, but towards the end of the evening, the two of them figured out how to drop the others off first so they could spend the rest of the evening together. Soon after, they fell in love. They married on June 10, 1950. They spent most of their married lives raising their children in Moline, Illinois. Catherine was a loving mother and devoted homemaker to her husband and six children. She also kept the books and payroll for her husband’s tool and die manufacturing business. George was a pilot, using his airplane for business and pleasure around the Midwest region, and the family has fond memories of afternoons and evenings spent polishing the airplane’s bright exterior and then taking rides together. She loved to read, work outdoors, play bingo, and listen to music. Catherine is survived by daughters Linda (Russ) Lingafelter, Bonnie (Robert) Haller, Peggy (Richard) Carmack, Sandra (Leonard) Pate, son Rick Finch, siblings Bob York, Gary (Sandi) York, Paul York, Pat (Ruth) York, Connie (Vince) Welk, Judy (Carl) Fleetwood, Marsha York, Pam (John) Jones, Jackie Riley. She has seventeen grandchildren, thirty great grandchildren, and four great great grandchildren. She is preceded in death by her husband George Finch, son Thomas Finch, and siblings Melvin (Snooks) York Jr., Jerry York, Jack Promisson, Shirley Ballinger, Vivian Washam, and Donna Walton. Visitation will be Tuesday, November 5 from 12-2p.m. at Pine Rest Funeral Home in Foley. Funeral services and Mass of Christian Burial will be at 2p.m. Tuesday, November 5 at St. Margaret’s Catholic Church in Foley. Following mass, burial will be at Pine Rest Cemetery in Foley.

Catherine went home to be with the Lord on November 2, 2019. She and her late husband George resided in Baldwin County, Alabama since the mid-1980&#8217;s and were members of St. Margaret&#8217;s Catholic Church in Foley. Catherine was born... View Obituary & Service Information

The family of Mrs. Catherine D. York Finch created this Life Tributes page to make it easy to share your memories.

Send flowers to the Finch family.