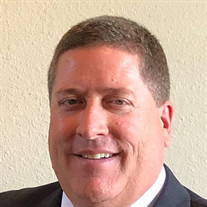 Billy Lee Lankford III, age 50, passed away on October 5, 2021 at Thomas Hospital in Fairhope, Ala. Paige Lankford, his devoted wife of 26 years, was by his side. Billy was born on February 16, 1971 in Great Lakes, Illinois. He received a bachelor’s degree in criminal justice from Texas Christian University. Upon graduation, he was commissioned in the Army and bravely served for eight years as an Airborne Ranger. His assignments included Fort Bragg, Fort Benning, South Korea and the Sinai Peninsula. Following his retirement from the Army, Billy enjoyed a successful career in medical sales, achieving top rankings in his company. At the time of his passing, he was the owner of Lankford Allstate Agency in Fairhope, Ala. and the producer of the St. Michael Catholic High School football broadcast for Archangel Radio. Billy was a devout Catholic and an active parishioner at St. Lawrence Catholic Church. He loved sports, good conversation, and most significantly, his family. Billy shared his passion for athletics through coaching soccer and lacrosse, encouraging football players before a game and participating in his sons’ sports and activities. He loved his boys immensely and was so proud of them; spending time with them was the driving force behind his involvement in their sports teams and youth groups. Billy is survived by his wife, Paige Watler Lankford, and their two children, Drew Lankford and Ryan Lankford; his parents, Billy Lankford, Jr., and Luisita Lankford; his sister Kristin Wegner (Mike) and their children Ethan and Emma; and his mother-in-law, Peggy Reynolds Watler. Billy leaves behind numerous family members including aunts, uncles and cousins who will miss him greatly. Billy was preceded in death by his grandparents Billy Lankford, Sr., Loretta Lankford and Gloria Roman; and by his father-in-law, Don Watler. Visitation for Billy will be Monday, October 11 from 9:00 a.m.- 11:00 a.m. at St. Lawrence Catholic Church in Fairhope, Ala. Mass of Christian Burial will be celebrated at 11:00 a.m. Interment will follow at Pine Rest Funeral Home in Foley, Ala. In lieu of flowers, please send donations to St. Michael Catholic High School at 11732 St. Michael Way, Fairhope, AL 36532, or Archangel Radio at 399 S. Section St., Fairhope, AL 36532.

Billy Lee Lankford III, age 50, passed away on October 5, 2021 at Thomas Hospital in Fairhope, Ala. Paige Lankford, his devoted wife of 26 years, was by his side. Billy was born on February 16, 1971 in Great Lakes, Illinois. He received a bachelor&#8217;s... View Obituary & Service Information

The family of Mr Billy Lee Lankford III created this Life Tributes page to make it easy to share your memories.

Send flowers to the Lankford family.