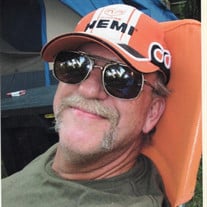 Billy Joe Forbes Jr. passed away November 3, 2020 In Foley, AL. Billy was born December 13, 1958 to Barbara and Billy Jo Forbes, Sr. Bill Forbes originally from Danville, IL, worked most of his younger days at World Color Press, in Effingham, & Salem IL., and finished out his career as a Truck driver.  He married Beverly Ann Tarlton on 2-2-96.  They have done a lot of traveling through the years.  He was an avid motorcycle enthusiast, and a diehard Chicago Bears, and Cubs fan! He loved life,& spending. Billy is survived by his wife, Jessica Forbes, from IL and his sons, Billy Joe Forbes III, Eric Allen Forbes (girlfriend- Robin Plummer, from IL) and Billy Joe Tarlton, from Mo. He is survived by his cherished grandchildren, Gage Michael Forbes, from Al., Brock Allen Forbes, from IL, Jasmin Olivia Tarlton, from IL, Brayden Tyler Christianson, from IL and a great grandchild, Sage Lendon Forbes, from Al. Billy is also survived by his sister, Janice Hammonds, from IL, Victoria Forbes, from and a brother, Jeff Zumwalt and his wife, Tasha, from IL. Billy is preceded in death, by his mother, Barbara Zumwalt his father, Billy Jo Forbes Sr. and stepfather- Wilbur (Dewy) Zumwalt. Time with is beloved wife, and and visiting his children, and grandchildren! He was our ROCK, and will be missed forever!

The family of Mr Billy Joe Forbes Jr created this Life Tributes page to make it easy to share your memories.

Send flowers to the Forbes family.