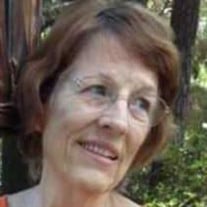 Barbara Reuss passed away on November 23 at age 78. Born in Chicago, Illinois, Barbara was preceded in death by her parents, Urban and Blanche Wolters and her sister Diane Barkley. Barbara graduated from York Township High School, Elmhurst, Illinois in 1959. She worked as a secretary at American National Bank in Chicago where she met her husband John. After the birth of her son David, Barbara became a stay-at-home mom and homemaker in Lombard, Illinois. Barbara loved every animal she met. After relocating to Magnolia Springs, Alabama, she became a volunteer at the Baldwin County Animal Shelter. Concerned that the shelter did not provide adequate care for the animals and did not follow accepted euthanization procedures, Barbara wrote a Letter-to-the-Editor about her concerns. This letter led to major changes; management of the shelter was transferred to the Alabama Department of Public Health, new staff was hired and the animal holding areas were improved. Then Barbara became a volunteer at the Baldwin County Humane Society. She was twice named Volunteer of the Year. Barbara personally rescued dozens of dogs and cats, caring for many in Magnolia Springs. It was not unusual for up to 15 dogs to be with her at home. She leaves to cherish her memory her husband of 52 years, John F. Reuss; her son David Reuss (Jennifer); daughters Laura Reuss (David Roye), Margaret Reuss, and Catherine Reuss; and grandchildren Molly, Michael, Jack, Andrea and Colby and great grandson Silas and many nephews, nieces and cousins. Barbara loved her family and enjoyed spending time with her grandchildren. Animals and Perry Como were her passion and painting and quilting were her hobbies. She will be missed by all who knew her. A memorial celebration of her life will be held at Pine Rest Funeral Home in Foley, Alabama. A second memorial celebration will be held in Illinois in January 2020. Barbara’s family would appreciate Memorial Donations be made to All About Dogs Coastal Rescue, P.O. Box 476, Magnolia Springs, Alabama 36555.

The family of Mrs. Barbara Reuss created this Life Tributes page to make it easy to share your memories.

Barbara Reuss passed away on November 23 at age 78. Born in Chicago,...

Send flowers to the Reuss family.