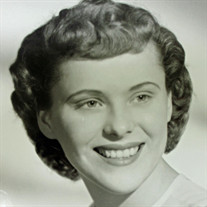 Anne Ruth Jaslowski Brown – Age 84 – A native of Pine Creek, PA and a longtime resident of Daphne, AL, passed away on Saturday, May 18, 2019. She came to Mobile in 1968, with her husband Robert “Bob” Brown, and their three sons. She was a member of St. Matthew’s Episcopal Church in Mobile from 1968 until 1989. Upon Bob’s retirement, they moved to Daphne, where she became a member of St. Paul’s Episcopal Church. Anne was a loving wife, mother and grandmother, and a dedicated homemaker. She enjoyed music with her family, and she loved spending time boating, fishing, and relaxing in Orange Beach. She had a kind and loving spirit, and spent her life caring for her children and grandchildren. She was preceded in death by her parents, Louis and Mary Jaslowski, her sister, Louise Ehrmann, her husband of 52 years, Bob Brown, and her son, Robert “Bobby” Brown. She is survived by two sons, Scott (Janet) Brown of Daphne and David (Machelle) Brown of Orange Beach, AL; five grandchildren, Daniel Brown, Matthew Brown, Nolen Brown and Carianne Brown all of Daphne, and Audrey Brown of Orange Beach, nephews, Richard and Christopher Ehrmann, and other relatives. Family will receive friends from 2:00 to 3:00 PM on Wednesday, May 22, 2019, with the funeral service beginning at 3:00 PM, at Pine Rest Funeral Home in Foley, AL. Internment will follow at Pine Rest Memorial Park.

The family of Mrs. Anne Ruth Jaslowski Brown created this Life Tributes page to make it easy to share your memories.

Send flowers to the Brown family.