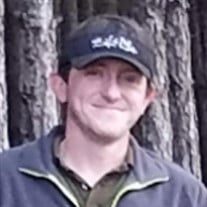 Allan Russell DuVall, 35, was born on May 24, 1985 in Kokomo, IN and passed away on August 28, 2020 in Fairhope, AL. Allan was married to Keishia Smith on February 29, 2012 in Bay Minette, AL and was a step-father to Kamden McLean. He was the son of Gregory Allan DuVall, the grandson of Lucille DuVall and proceeded in death by his Grandfather, Louis Allan DuVall. He was a special friend to Linn Godard. Allan is survived by his Uncle, Jeffrey L. DuVall and his two children, Elizabeth and Danielle. He is also survived by his Aunt, Catherine A. Joosten and her children, Louis A. Joosten, Lauren Lowrey, and Victoria J. Walker. Growing up Allan played little league baseball and also enjoyed summer camp, ASCCA, provided by the Hemophilia Association in Alexander City. Allan spent many of his younger years at his Grandmother's condo fishing, jet skiing, crabbing, boating, swimming and snorkeling. Allan graduated from Gulf Shores High School in 2003. He enjoyed playing the drums in the marching band, but hated to read the music. He excelled at many subjects and was offered schooling at Alabama School of Math and Science. In 2004 he started attending Faulkner State Community College. In 2006 Allan started his Pharmaceutical Sales journey and continued on until 2012. He then worked for Mo's Bait & Tackle and The Gulf State Park Pier and loved being able to work on the water everyday. Allan was able to make many enhancements to the pier from a fisherman's and handyman's point of view. He shared many conversations and made many memories with all the fisherman and saved many pelicans. He was a huge animal lover and never met a stray cat. Cars were Allan's passion. Many days were spent in his barn tinkering with a motor, restoring a car, or just looking at his tools. He very much enjoyed looking and working on hot rods and going to car shows. Allan was such an easy going guy who would always go with the flow and stop what ever he was doing to help anyone out no matter how he felt at that moment. Allan loved so many things including, drawing, wood burning, creating things with his hands, building, reading, loving on his cats, family dinners,watching Kamden at his baseball and soccer games, Clash of Clans, dominating and beating you at video games, geocaching, PokemonGo, taking his family on the waverunner, spear fishing, exploring the coast, stargazing, camping in the backyard, driving anywhere, chocolate milk, Old Fashion Cream Pie, catfish, Papa John's Pizza, but most importantly his family and friends. A celebration of life will be held at Pine Rest Funeral Home located on HWY 98 in Foley, AL on September, 12, 2020 at 2:00pm. Dr. Lawrence Phipps officiating. In lieu of flowers, donations may be made to: Hemophilia Foundation of America www.hemophiliafed.org 999 N Capitol Street NE Suite 201 Washington, D.C. 20002

The family of Mr. Allan Russell DuVall created this Life Tributes page to make it easy to share your memories.

Send flowers to the DuVall family.